Established in 2012, this award pays tribute to notable alumni who have used their Shorecrest experience to bring excellence to their professional achievements, provide inspirational leadership to others and develop exceptional qualities.

Nomination Criteria
For an alumnus to be considered for the Alumni Distinguished Achievement Award, the candidate must have attended Shorecrest for a minimum of 4 years, and at least 15 years shall have elapsed since his/her graduation.
Selection Criteria
To submit a nomination, you may fill out the form at left or download a nomination form here. Deadline: August 30. 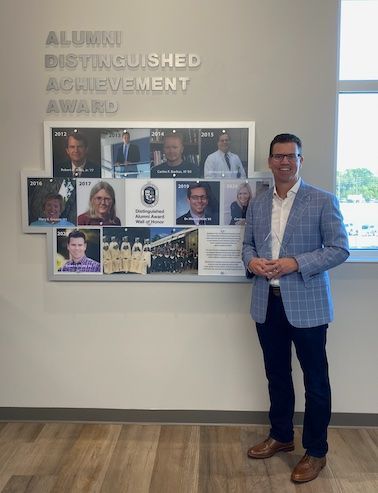 Shorecrest Preparatory School is proud to announce that Rob Grady ‘86 has been named the 2020-2021 Shorecrest Alumni Distinguished Achievement Award Winner. From Shorecrest, to Harvard, to Stanford, and on to leadership positions in some of the world’s leading businesses including P&G, Starbucks and Amazon; Rob has continued to model Shorecrest’s mission and core values in his professional and personal endeavors, and serves as an inspiration to current and future Shorecrest students. Rob was recognized at Shorecrest on October 7, 2021, at an Upper School assembly.

Rob’s impressive career experience spans from early-stage startups like RealNetworks, the original pioneer in Internet audio and video, to large consumer brands, including Procter & Gamble. Currently General Manager for the Amazon Transportation Product/Tech Team, Rob leads the Amazon Freight Partner program, which empowers transportation entrepreneurs to start and grow trucking businesses with Amazon. He joined Amazon in 2014 and spent his first five years as COO of IMDb - the world’s most popular and authoritative source for movie, TV and entertainment content - and Amazon’s first-ever acquisition.


Prior to IMDb, Rob was COO of Wetpaint, a venture-backed digital media startup that was acquired by Viggle, Inc. in 2013. Before that, Rob spent seven years with Starbucks, where he was Vice President, Global Beverage, and Director of New Ventures for Starbucks’ U.S. operations.


A self-described “learning curve addict,” Rob is a lifelong learner who savors exploring new industries, companies, leadership challenges and technologies. He’s also committed to mentorship and supporting future business leaders. Those that know him attest that Rob is “a natural mentor in all areas of his life.” He is continually sought out by friends, co-workers and colleagues for advice, guidance and mentorship - as they like to say at Amazon, it is one of his “superpowers.”


Rob’s leadership abilities date back to his Shorecrest days when he served as Senior Class President, National Honor Society member, and Prom Committee member, among many other leadership opportunities and extracurriculars including multiple Chargers Athletics teams, all while excelling academically. He credits his time at Shorecrest with helping him to learn to balance competing priorities in life.


Rob continued to effectively balance leadership with academics at Harvard where he was president of his club, a class president and on “The Crimson” staff.


Rob has been part of the University of Washington (UW) Foster School of Business Mentoring Program for over 10 years, and was recently recognized for his 10 years of service.


In 2019, Rob was invited by Andy Jassy, now CEO of Amazon, to craft and participate in the inception of a mentor program with the UW Men's Basketball team. Through the program the coaching staff pairs each player with a local business executive to help the players to develop and meet their goals for “life after basketball.” The program is an intersection of two of Rob’s passions - mentoring and sports, particularly Seattle sports teams, including UW football, basketball, and the Seattle Seahawks.


As involved as he is at work and with the greater community, to Rob, family always comes first. A devoted husband and father, Rob has been married to his wife, Amy, for 26 years. Together they have two grown boys, Kellen and Connolly. He’s also known as “favorite uncle” to nieces and nephews on both sides of the family.


“We are so proud to call Rob a Shorecrest alumnus and are excited to honor him with the 2020-2021 Shorecrest Alumni Distinguished Achievement Award,” says Shorecrest Director of Alumni and Community Relations Stacy Alexander. “He truly exemplifies the School’s mission and is an inspiration to current and future Shorecrest students.”