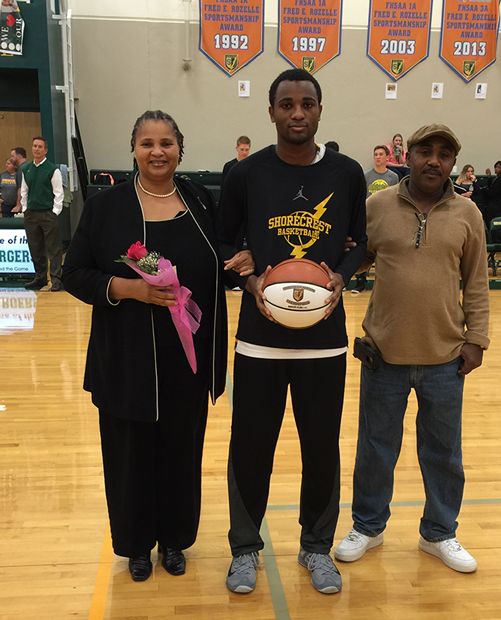 Published 1/21/2016
by Coach Daryl Blume
Chargers vs St. Petersburg Catholic, 1/14, 79-48 Win
The Chargers came out strong in the first of a back to back to back set of games, starting at home against SPC. The Chargers built a 44-25 halftime lead and never looked back. Devin F. had a hot shooting night with 6-3’s, 6-6 from the FT Line and finished with a game high of 24. Marcus was stellar coming off his 1,000 point night and added another 20 points to his career total. Tyee and Colin rounded out the scoring with 10 and 9 points respectively in this total team effort.

Chargers vs St. Stephen’s, 1/15, 86-34 Win
It was Senior night, and Marcus, Tyee, Aundre, Kent and Devin were recognized for their contributions to Charger basketball. Their collective careers have been nothing short of spectacular as they wind down on arguably the strongest group of 5 seniors to finish at Shorecrest.

On this night Devin F. continued his hot shooting of late and made 8-3’s on the night, 5 in a single quarter and ended the night with 26 points, a career high, and his second career high on consecutive nights. Kent had 16 and Marcus 14 in the winning effort.

Chargers vs Berkeley Prep, 1/16, 66-64 Win
A slow start saw Berkeley jump out to a 5-0 lead. The Chargers would not be deterred as Kent dropped a 3 and Marcus had 3 sweet drives to close the gap to 14-13 at the end of the 1st quarter. Kent and company got “red hot” in the 2nd quarter posting 5-3’s, 3 consecutive by Kent and then Tyee and Aundre got into the action as well as. The Chargers bolted ahead and led 38-30 at halftime.

Berkeley tightened up their “D” in the second half and by mid 4th quarter the game was tied. The Chargers inched ahead, but missed 4- free throws down the stretch and a late 3 by Berkeley saw the game tied at 64 with 20 seconds left. The Chargers would not flinch. Marcus patiently waited till the 10 second mark, drove hard off a high pick, was cut off, but spun and lofted a floater through the net for the win!

We talk about “statement games”, and this was a big win against a 4A Class opponent that should serve us well for our stretch run. This is the type of game we will need to win to get deep in the playoffs.
Next Game:
Monday, January 25 @ 7PM vs Clearwater Central Catholic. Last regular season home game. Come see this group of amazing seniors finish up their careers!