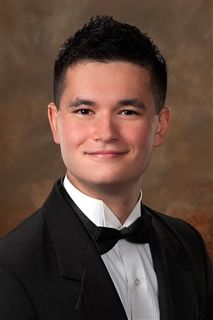 On August 19, Carter Vivio will be ready for orientation at Kenyon College in Gambier, Ohio. His mother, avid volunteer Beth Vivio, who also serves on the Board of Shorecrest, attended Kenyon, and the family had a running joke that Carter would probably land there. But after a summer visit between junior and senior year, the joke became serious. “The quality of what they have to offer really appealed to me. It seemed like someplace that would challenge me and also be a place I’d want to hang out. I want to think about it, but I have to focus on finishing my time here at Shorecrest,” he said during his final weeks at Shorecrest.


Carter has more to focus on before that paramount first day arrives. Three weeks after graduation he will be hiking the Appalachian Trail with a church group, a feat he’s accomplished before, and then staying on to be an official trail guide for another group. Carter enjoys the introspection that comes with hiking and running, and he thoughtfully seeks out opportunities like these - such as running for the Chargers cross country and track teams since Middle School and attending the senior boys Smoky Mountains Service Week trip.


Carter had his eye on the Smoky Mountains Service Week trip since eighth grade. “The Class of 2013 had the inaugural trip and they also had the most insane weather,” he recalls. Xingkai Liu, the Salutatorian that year, was an exchange student living with the Vivios, and Carter attended his graduation ceremonies.


Carter recalls, “His entire Baccalaureate ceremony was about the snow collapsing tents, how they had to revert to the maintenance department break room to sleep. Mr. Murphy said that the only thing that could make this worse was a bear attack. I thought, ‘I want to struggle. This sounds awesome.’”


According to Carter, the experience lived up to his high expectations. “It met every dream I could have had. Paul the Park Ranger taught us Appalachian dialect. He gave us axe swinging lessons and we had a tournament with teams of 3 swinging at a log. We put on leaf blowers like the Ghostbusters. It was awesome.” 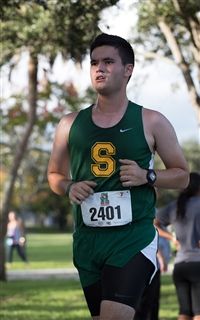 Enduring grueling hikes or long runs allows Carter time to let his mind wander. “Most people, when they think about hiking the Appalachian Trail or running a marathon, they think about the physical activity of doing that. Then while you’re doing it you are no longer thinking about doing it. That’s the time for introspection. Or I might be thinking about how many peanuts I can shove into my mouth.”


A comment like this one is typical of Carter. One of his teachers notes, “Carter rarely has anything but a smile on his face even when he is being significantly challenged. He comes into class each day with a smile and either a new idea, usually a bit obscure or goofy, or a well-thought out question. It is this approach to each day that I think helps Carter succeed.”


Although Carter enjoyed watching sports and practiced martial arts as a child in Texas, he didn’t feel like an athlete before arriving at Shorecrest. That changed when he joined the cross country team. “And the rest is history, I have to say. I sort of became addicted to running.”


He continues, “Some of my best friends I’ll ever have are because of cross country and track, especially my senior year. Karen Quilty was hired as the distance track coach and this last season has been hands-down amazing. She’s really personable but she knows exactly how much to push us to where we’re being extremely effective with our workouts. My performance has gotten stronger, but also we as a team have gotten significantly tighter because we’re having fun and the Coach is facilitating us in this fantastic way.”

Carter remembers one particular day bonding over a hard workout, “One Monday when we didn’t have school, we met for speedwork near the Skyway bridge and then had brunch at Trip’s Diner. It was fantastic. It was sort of a ragtag group of underclassmen and Olivia, Kyle and I, and Coach Quilty came in and tied it all together.” 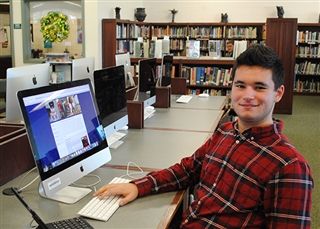 Carter is good at finding adult leaders he can rely on. In addition to Coach Quilty, he has felt support from Band Director Ethan Updike, Upper School History Teacher Ron Heller, and his Latin teacher.


A committed member of Concert Band, Carter has played the trumpet since sixth grade and was inducted into Tri-M, the Music Honor Society, in ninth grade. He was particularly excited when Mr. Updike joined the faculty because he’s also a trumpet player. “The first time I heard him play it was like, Woah! He’s so much more powerful with his sound and his range.” Carter credits Mr. Updike with helping him improve his playing skills.


Mr. Heller, however, has been a travel companion through high school. “We really bonded when we travelled to England together right after my freshman year, we’ve done two service trips together, and most recently we went to Philadelphia together for Model U.N. He’s never actually been a teacher of mine, but he’s always been one of my most trusted mentors. I can talk to him in and out of school for any reason. ” Carter is also a member of Key Club, and Mr. Heller is the faculty sponsor of the club.


Carter’s Magna Cum Laude placement on the National Latin Exam came with a faculty mentor in tow as well. “I started Latin in Mr. Agier’s Middle School class where he led us through a textbook called “Ecce Romani.” It was a story of a family of a politician that got called to Rome, which was a 3-day journey, and their carriage got stuck in a ditch. The entire year of eighth grade was reading about them and their stupid trailer stuck in a ditch. It made eighth grade Latin hilarious. Then in ninth grade we had Mr. Wells and grammar lessons, conjugating verbs and getting into the nitty gritty of the theory of language.”


Latin at Shorecrest became an online class, and Brian Wells moved to Georgia, so Carter took Advanced Placement Latin in an online format with Mr. Wells as his instructor. Mr. Wells reported, “The class consisted of live chats beginning at 8:00pm each Sunday night. Carter committed himself to preparing and working diligently throughout the course.”


Some of that responsibility and maturity came from working alongside undergraduate and graduate students at a young age. In the summer of 2015, Carter was selected to spend four weeks at the Rehabilitation Robotic Research and Design Laboratory, located at the new Pennsylvania Institute of Rehabilitation Medicine at the University of Pennsylvania School of Medicine. Run by Dr. Michelle Johnson, the lab designs robots for rehabilitation, specifically using robotics to understand arm dysfunction and recovery after a brain injury or stroke. “I worked with 11 undergrad/graduate Penn engineering and medical students to design and assemble robots to assist stroke patients. The internship opened me up to neuroscience. Everything I was doing was very robotic and mechanical, but it also had a human side to it with understanding what stroke patients go through and how we can build these machines to help them.”


“Next year as a freshman, I want to be able to efficiently juggle my academics and extracurriculars. I have all these sort of hopes and dreams about what academics I want to do. I might want to do mixed martial arts classes or rugby or ultimate frisbee, but on the other hand I also want to be a psychology major with a neuroscience concentration and I want to take intensive language courses in French. I keep bouncing in my mind about how I’ll be able to do all these things I want to do. So that’s kind of my goal, to figure out what I want to do and do it without failing my classes or getting in trouble. Just do it.”