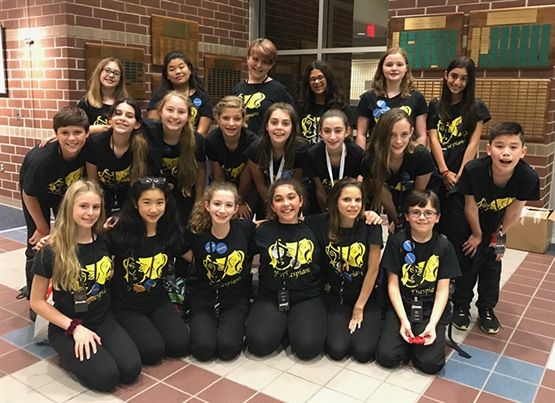 Published 11/29/2018
by Stephanie McCarthy, Jr. Thespian Director
Shorecrest's Jr. Thespians Troupe 88197 have been rehearsing with Mrs. McCarthy since early September in preparation for the recent Jr. Thespian District Festival and all their hard work paid off. The Troupe took a total of 21 Acts to the Festival to receive professional adjudication amongst 20 other schools in the District.

Mrs. McCarthy is very excited to announce that every single Shorecrest student won an award this year. Five acts were scored and rated as Excellent and 16 received the highest score rating of Superior.

Not only has Shorecrest qualified for the State Festival, but they also have more qualifying acts than we are allowed to bring due to State restrictions. Only the top 8 acts will move on to the State level which is based on the points given by the adjudicators. State qualifiers include eighth graders Brie A, Sofia A, Phoenix B, Holland B, Jolie B, Allie K, Hana K, Alissa S, Grace W; seventh graders Ethan B, Ava H, Sofi R; and sixth graders Lily B, Maggie B, Sarah K, and Layla H.

In addition to competing at the festival, every Jr. Thespian took an opportunity to run the Broadway Cares table on Saturday, as well as conduct the Bucket Collection at the end of the Closing Ceremony. They raised $308 for Broadway Cares.

Solo Musical:
B.Anderson - "Nothing Short of Wonderful"/ Dogfight – SUPERIOR
G.Williams - "Once Upon a December"/ Anastasia – SUPERIOR
J.Bentley - "Nobody Steps on Kafritz"/ Henry, Sweet Henry – SUPERIOR
R.Sembler - "Not for the Life of Me"/ Thoroughly Modern Millie – SUPERIOR
H.Bentley - "Ring of Keys"/ Ordinary Days – SUPERIOR

Duet Acting:
Ayral-Hutton & Bentley -"Above it All" by Mary Hall Surface – CRITICS CHOICE