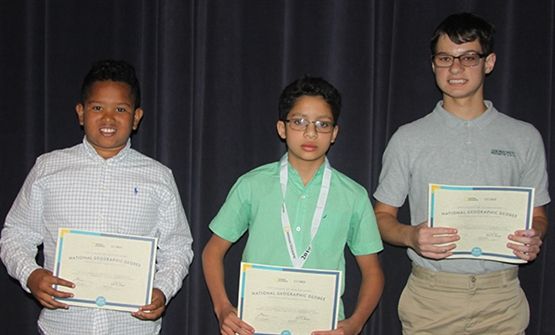 Published 1/17/2019
by Raffi Darrow, Ebytes Editor
The National Geographic GeoBee was held in the Janet Root Theatre on January 17. The top two geographers from grades 4-8 competed on stage, plus last year's winner. The Shorecrest 2019 GeoBee Champion was seventh grader Nicolas H., for the fourth consecutive year! The last three years he won at Shorecrest and also qualified to compete at the state level.

The National Geographic Bee is a US competition designed to inspire students to be curious about the world. Registration is open to schools with students in grades four through eight. Each year, thousands of schools in the United States participate. School champions take a qualifying test, which gets submitted to the National Geographic Society. Up to 100 of the top-scoring students in each of the 50 states, District of Columbia, Department of Defense Dependents Schools and U.S. territories compete in the state GeoBees.

Congratulations to all of our contestants on your hard work!

Check back in future editions of Ebytes to see how Nicolas fares against students from other schools.