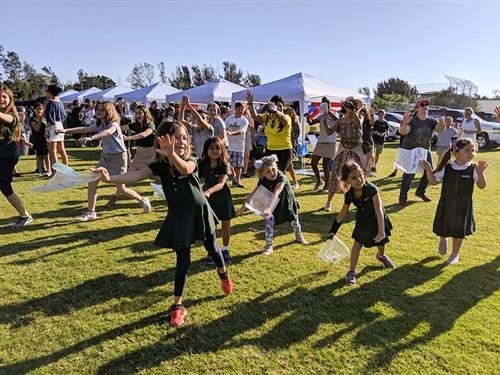 Published 4/24/2019
by Emili Jaime-Allwood, Lower School Spanish Teacher
On Thursday, April 18, Shorecrest Lower and Middle Schools celebrated at a FERIA LATINA. Hosting this fun Fair for other grade levels has been part of the curricular project-based learning for the third and fourth grade Spanish classes for five years. This year the event was expanded to include Middle School. Now, it is a curricular project for the 3rd-8th grade Spanish classes!
Each grade had a different project to complete that became part of the Fair. For example, third grade studied the capital, the national flower, the national bird, etc. of different Spanish-speaking countries. Fourth grade studied the climate of the country in the northern, southern, eastern, and western regions. Fifth grade studied landmarks of the country. Sixth grade prepared a typical dish from the country they represented. Seventh grade learned traditional dances of the countries. Eighth grade learned about famous soccer players from Latin America. All of these projects employed new vocabulary skills in the target language.
The visitors at the FERIA LATINA were students from The Experiential School, kindergarten, first and second grades, as well as Middle School French students. Two classes of seventh grade Spanish students from Academy Prep also attended.
Everyone had so much fun! A dance instructor, Lisandra Salazar, taught the children how to dance Latin rhythms. Part of this wonderful experience was thanks to the collaboration and assistance of the wonderful group Shorecrest Latinx, the community’s Latin parents!

"It felt authentic, and while parents were proudly there representing their countries, the activities were student-led and they took their role seriously. My class enjoyed every bit of it (and so did I.)" shared first grade teacher, Christine Oman.

Lower School Spanish teacher Bennett Zamoff congratulated his coworker Emili Jaime-Allwood, the Lower School Spanish Teacher who organized the event, saying, "I loved the collaboration with Middle School and the way so many students from so many grade levels were so highly involved and invested in what they were doing. What a great way to enhance and connect to our Spanish lower school curriculum. This involves so much dedication and attention to so many details -- big and small. Many congratulations!"
The children were engaged, they practiced their Spanish and it was a full Latin experience for our students! The Lower and Middle School Spanish classes did a fantastic job! ¡BRAVO!