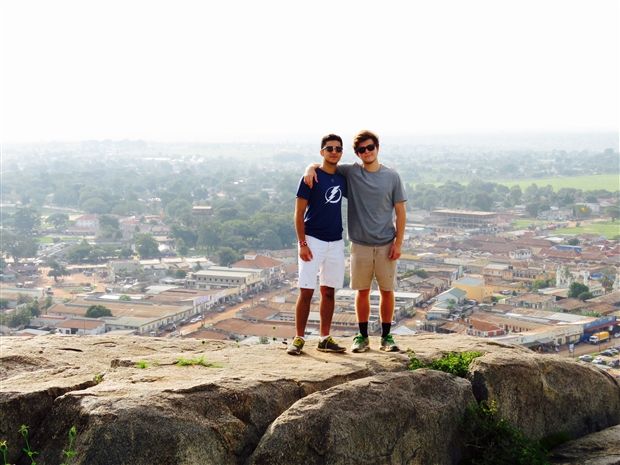 Published 7/30/2019
by Lily Schneider, Advancement Intern
The experiences had and people met while at Shorecrest really do have the potential of changing one’s life. Shorecrest instills values of service learning in each student who comes through the school. Dylan Leary '16 and Seif El Masry ‘16 are carrying this value forward into their adult lives.

In 2015, Dylan and Seif traveled to Uganda when the Hursey Resort at Camp Saint Mary was nearing completion. This was a project that Dylan’s grandparents helped fund. The two not only represented Dylan’s grandparents, but also created a short promotional video to explain the background of the project and what the camp’s goals are long-term.

Four years later, after spending some time in their respective career fields of food and medicine, Dylan and Seif began considering the possibility of returning to Soroti to utilize their skills and experience to transform the community. In the midst of planning their initial trip together, the two decided to turn this vision into an organization with many trips and destinations ahead. On May 29, 2019, just a day before Dylan’s 21st birthday, People4Tomorrow, Inc. was incorporated as a 501(c)(3) nonprofit organization in the State of Florida.
The most significant goal of People4Tomorrow is to create a better tomorrow in rural and impoverished communities, beginning with Soroti, Uganda. “The hope is to minimize the current gap that exists in our global landscape while providing aspiring students with culturally rich, eye-opening experiences,” says Leary. He and El Masry believe that through a multi-faceted approach to community transformation, they can create a positive effect that will last for generations in each community that they get a chance to work with. They aim to teach self-sustainability as a core concept to ensure that the communities they work with will be better off after they leave.
The inaugural trip to Soroti in August 2019 is quickly approaching, and the two are extremely excited to begin work in this community and lead two teams with medical and culinary focuses. A third team consists of an agricultural team.

The medical team, led by El Masry, plans to provide a cost-free clinic for the community at Princess Diana Hospital, an institution close to the rest of the town. This medical team will look to provide general and specific care to the community. One of the first tasks will be to tackle the severe outcomes that the high prevalence of STIs in the region has on pregnant women and children by demonstrating the use of efficient, cost-effective screening and treatment methods.

The culinary team, led by Leary, will provide educational and hands-on training for chefs and managers from local restaurants and hotels, lessons of food safety, and information on international cuisine and proper restaurant service.

Finally, the agricultural team, led by Dylan and another Shorecrest alumnus, Chase Mills ‘16, will be spending time with local farmers. They will teach skills in regenerative agriculture including composting, companion planting, and cover cropping to increase yields and nutrient density of their crops.
The future not only holds great plans for the two collectively, but also individually. Dylan plans to use his education in Culinary Arts and Applied Food Studies to work in a variety of areas in the food world, mainly focusing on different ways he can transform our current global food system. Dylan has taken a great first step in doing this by creating this organization and making even greater plans for many more locations once he graduates in December. Leary’s experience at an organic and biodynamic farm in Southern California, as part of his time with the Culinary Institute of America, opened his eyes to the importance of sustainable agricultural practices in a healthy food system. He plans on incorporating agricultural education into future projects. Currently, Leary serves as the President of Student Government at the CIA in Hyde Park, NY. He works with administrators that are looking to collaborate with People4Tomorrow to send consistent groups of culinary students to Uganda in years to come. Later down the road, Leary is interested in pursuing a career in food policy and potentially running for public office.
Seif, an aspiring physician, hopes to begin medical school by this time next year. Between now and then, he looks to grow People4Tomorrow as a nonprofit that pre-health students from his university, the University of Florida, can become a part of while working on its eventual expansion to other universities. With an understanding of global health disparities, the ultimate goal of the medical side of things would be to evolve People4Tomorrow into a program that students can use to gain insight into the medical field while immersing themselves in unique cultures across the globe. And most importantly, continue a program which provides services to communities in need of medical attention. In the future, Seif hopes to be the practicing physician in charge of the medical operations of People4Tomorrow.
Leary and El Masry have followed their passions in planning for their nonprofit, People4Tomorrow. The two have already begun tremendous work to help support the lives and well-being of other communities in our world. On behalf of the Shorecrest Alumni Association and the greater Shorecrest community, we wish them both the very best in your endeavors and can’t wait to see the changes they will make!
If you’d like to learn more or support Dylan and Seif’s mission to make positive change in communities in need, please visit People4Tomorrow’s GoFundMe page: https://www.gofundme.com/f/people4tomorrow-soroti-uganda-2019.