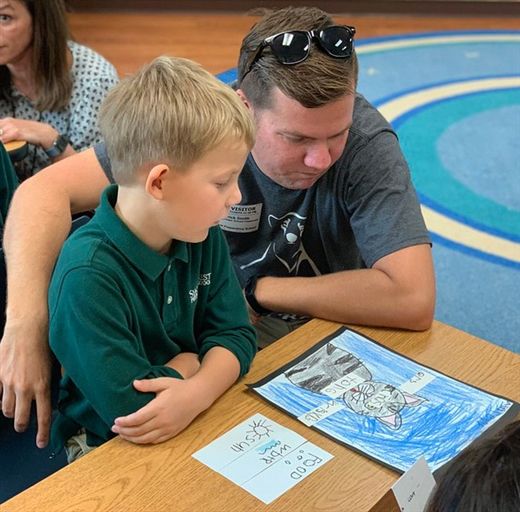 Published 11/21/2019
by Raffi Darrow, Ebytes Editor
Kindergarteners in Mrs. Damaskos’ class recently had a project share for parents/guardians regarding living and non living things. Their unit of study was centered around the essential questions, "What makes something living? How do we know it is living?"
To begin their investigations, the students brought in nature treasures from home and predicted if they were living. Some of their comments were:
“I brought in crystals because my Mom is a biologist. I don’t think they are living but they do grow.”
“I brought in a sea sponge I found from the ocean. I don’t think it is living. It doesn’t have any eyes.”
“I found a piece of tree bark that has seeds inside of it. It isn’t living because it does not move and I know living things move.”
“My nature treasure was a fall leaf. It was yellow. It is nonliving because it was already was off of the plant when I found it. If it was on the plant it would be living.”
Several field experiences contributed to their study, such as a visit to Boyd Hill Nature Preserve to sketch baby alligators and birds of prey. They observed fish, chickens, reptiles, and more at a local pet store to watch how these animals hatched, grew, and changed. The kindergarteners became fascinated with how living things grow and evolve.
They also performed experiments in the classroom such as watching a sweet potato sprout roots, stems and leaves. They dissected flowers to find the egg cells in the stamen. They discovered that a rosemary herb and seed grew and changed... they sprouted roots and buds. This hands-on exploration helped the students learn that all living things have life cycles, and grow and change. They learned that living things have essential needs: food, water, space and air.
Students then chose a living or nonliving thing to present to visitors in a visual representation of their choice. They "became teachers" for their visitors and answered the questions:
1. How do we know something is a living thing?
2. What do all living things need?
3. What medium did you use to create your project?
4. What was your favorite part of the study?
Around the room, visitors viewed clay sculptures and paintings made by the children, their nature treasure display, the sweet potato sprout, and their science journals with sketches of plants and animals.