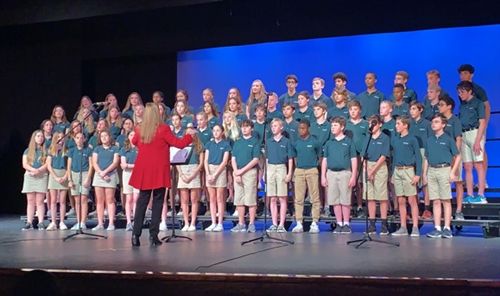 Published 12/19/2019
by Stephanie McCarthy, MS Music Teacher
The eighth grade Music Presentation was held in the Janet Root Theatre on Wednesday, December 18, featuring an array of pop and festive songs.

To start, a choreographed rainstorm preceded the intro of the pop hit "Africa" by Toto, and was followed by "A Million Dreams" from The Greatest Showman.
Mrs. McCarthy then interrupted the program to ask the student performers to raise their hands showing how long they've been at Shorecrest. Some of the students have known each other for up to eleven years, and this was the last time they will stand on stage as a grade level until graduation of the Class of 2024. This acknowledgment was a great segue into the song, "Amigos Para Siempre" (Friends for Life).
Next up the students sang three seasonal songs, "Walking in a Winter Wonderland," "Walking in the Air" (from The Snowman), and "The Polar Express" featuring Ethan B. as The Conductor.
Students voted on the finale song from the 164 songs they suggested. They pointed out the appropriateness of their selection, "Take Me Home, Country Roads," as we all head off into Winter Break to spend time with family and friends.

View a video of the performance here.