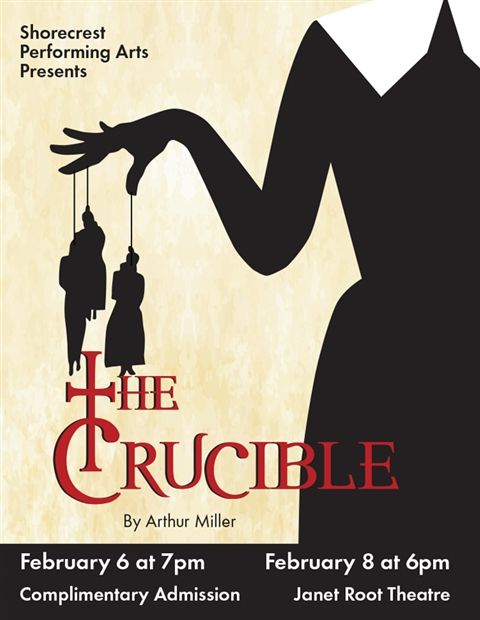 Widely regarded as one of the greatest American plays of all time, “The Crucible” is a classic portrait of one man’s struggle toward grace. While the play is based on historical fact, Miller took great artistic license to craft his story. The story is set in the scorching context of the 17th-century Salem witch trials, as a dangerous hysteria is unleashed. While focused on literal witch hunts, it is also an allegory for any number of misguided crusades through the ages. Human struggles, both internal and external, are examined: a community galvanized by fear and suspicion, a wife betrayed by lust, an orphan girl obsessed with revenge, ruthless prosecutors, deluded holy men and covetous neighbors. Miller’s script pulses with the destructiveness of socially sanctioned violence, the blindness of zealots, and the heart of one tortured man trying to find his own goodness.
Entrance to the show is complimentary with open seating. No ticket required.
“The Crucible” won the Tony Award in 1953 for Best Play. The play was first adapted for a European film in 1957, and later adapted by Miller in 1996. The latter was nominated for two Oscars, including Best Adapted Screenplay, Miller’s only Academy Award nomination. It has also been produced several times for television.
Director Bill Leavengood ‘78, an alumnus of Shorecrest Preparatory School, is a two-time Eugene O'Neill Award winning playwright. He has several off-Broadway plays to his credit, including "Florida Crackers," which was part of Circle Repertory’s 20th Anniversary season.
“The Crucible” is presented by special arrangement with Celebration of the Arts St. Petersburg. This annual February festival presented in our City of the Arts involves diverse musical and theatrical groups as well as museums united around the exploration of a singular theme. The theme for 2020 is Tolerance and Acceptance.
On Saturday, February 8, a community conversation entitled “Non-traditional Casting when Race is a Consideration to the Play’s Development” will be held in Shorecrest’s Janet Root Theatre from 3-5pm. Panelists include a Playwright, Director, Politician, Historian, and Producer/Patron.