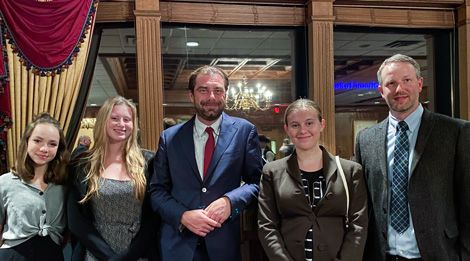 Published 1/23/2020
by Kurt Wahlgren, Global Scholars Initiative Director
On January 21, Global Scholars Initiative students Mila Salamone '22, Grace Salter '22, and Athena Smith '22 attended the Tampa Bay Area Committee on Foreign Relations dinner, featuring Dr. Burke-White.
William Burke-White is the Director of the Perry World House at the University of Pennsylvania. He specializes in relationships between international law and foreign policy, with emphasis on geo-political governance solutions that include multiple countries. From 2009-2011, Dr. Burke-White served in the Obama administration where he helped draft policy for Secretary of State, Hillary Clinton. Dr. Burke-Wright also served as Visiting Professor at Moscow State Institute of International Relations, Harvard Law School, the Hebrew University in Jerusalem, and Mofid University in Qom, Iran.
Dr. Burke-White’s talk was titled, “Five Forces Shaping the Future of America’s Role in the World.” Here is a summary of his arguments.
1. The Chinese Model is viable: China’s economic power is rising and, increasingly, showing that an authoritarian style of government can lead to economic progress. In addition, the Chinese military is building a second aircraft carrier and leading the Belt and Road initiative to tie regional countries into a strategic trade route.
2. Populist Nationalism: Economic disparity was created from the post-WWII liberal order, specifically, free trade. Voting patterns around the developed world show a populist backlash to job displacement and immigration.
3. Information Manipulation: It is harder to cut a “necessary” backroom deal as online transparency increases. Hackers can work from the comfort of their home state and cause chaos with disinformation campaigns abroad.
4. Artificial Intelligence: China could lose hundreds of millions of factory jobs due to automation. The U.S. trucking industry will be impacted, as well as the service sector and what is left of manufacturing positions. AI allows governments to track movements through facial recognition technology and cell phone signals. In addition, there is cause to worry about increased targeted assassinations via drones and robotic militaries, etc.
5. Climate Change: Geographic regions that currently have economic and security challenges are projected to be hit the worst by future climate change conditions. Drought will likely affect the Sahel (a region in northern Africa) and states in Central America, which will only add to current immigration complications facing the U.S. and Europe.
Athena Smith ‘22 had the following to say about Professor Burke-Wright’s remarks: “I had a great experience at my first TBACFR dinner, and was gripped by Dr. Burke-White's insight on the complexity and interconnectedness of global issues the United States is facing. As a student at the event, I found it especially interesting to hear how he believes these problems will unfold over time, and what responsibilities will fall on future generations.”
Mila Salamone ‘22 noted, “Dr. Burke-Wright referred to hope as the promise of a new generation. However, as a member of that generation, I can say that it gives me hope to have seen all those people gathered together, caring about what’s going to happen to our world.”