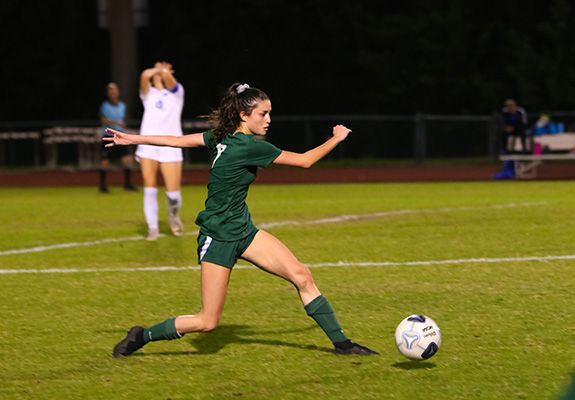 Published 2/27/2020
by Bob Putnam, Tampa Bay Times
Even the most impressive accomplishments have taken on an air of inevitability.

Of course St. Johns Country Day has dominated state competition in girls soccer. Of course the Spartans have been ranked among the top 10 in Florida — and the nation — throughout the season. Of course they were the overwhelming favorite to win another state title.

Should anyone be surprised? St. Johns Country Day, a small, private school in Orange Park, is a soccer juggernaut, a program so clearly superior at its level of competition that few opponents can muster a competitive game, much less the threat of victory.

This was the challenge Shorecrest faced in Wednesday’s Class 2A championship game.

The Chargers went on a charmed run through the playoffs, winning four straight games by multiple goals each while giving up just one total to reach the final for the first time in school history. But they were up against a team that was after more than a state championship.
The Spartans were trying to further cement their latest run as the greatest dynasty in state history. St. Johns Country Day entered Wednesday’s final having won eight straight titles, the longest streak of any program in state history.

Another one would not only give them nine straight but make it 12 overall, the second-most in state history and just three from tying powerhouse Fort Lauderdale St. Thomas Aquinas at the top of the list.

The Spartans accomplished what they wanted, cruising to a 4-0 victory.

“There was Goliath talk,” Shorecrest coach Neal Wolfrath said. “Obviously it was going to be tough. I mean, it’s the state final. They’re all tough. To many it was probably a foregone conclusion. We didn’t have that mindset. It was a tall task, and it just came down to a matter of executing.”
It took less than two minutes for St. Johns Country Day (24-1) to seize control. Hannah Lemieux scored a minute, 36 seconds into the match to make it 1-0. That lead was practically insurmountable. After all, the Spartans have given up just two goals combined in their previous eight championships.

And forget about the playoffs. It is difficult to beat St. Johns Country Day at any point in the season. The program’s record during this nine-year run: 204-5-4.
Much of that has to do with a defense that uses its speed to suffocate opponents. The Chargers (14-4-2) had averaged four goals per game during the playoffs but were unable to get past midfield often, much less attempt too many shots.

“(The Spartans’) level of effort and skill was definitely better than any team we’ve played this season,” said Shorecrest senior Christina Steffens '20, who finished second on the team in goals this season with 12. “We weren’t really expecting that. We knew they were good but it was quite a shift from the teams we’ve played that were slower in pace to one that is challenging every single ball.”