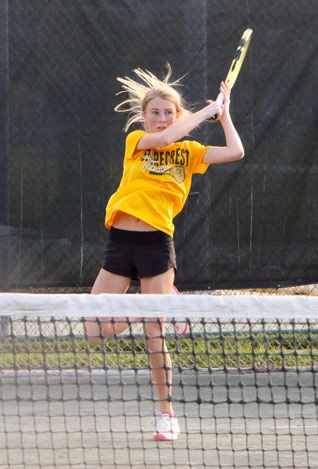 Published 3/5/2020
by Coach Cobb and Coach Stover
Chargers vs. Out of Door Academy
The Girls’ varsity tennis team has seen and given some tough competition in the matches since the season opening narrow win against Clearwater Central Catholic reported in the last ebytes.
Our second match, just before the spring break, was a 6-1 victory against the Out of Door Academy (ODA).

Lines 1 and 2, Wynn Bryant '20 and Kirsten Price '21, respectively, both won their singles’ competitions with handy 8-1 victories. Line 3, Keira H. '24, had a tough match but the 2-8 loss score was not indicative of the strength of her play, which was later truly depicted as a winning partner in shutout line 2 doubles. Line 4, Adyson J. '25, was a merciless victor leaving her partner with zero games (game score 8-0). Sofia Marston '21 covered line 5 with little trouble for an 8-3 win. Both doubles team showed they know how to close it out quickly with an 8-1 win for Wynn. Bryant '20 and Adyson J. '25 in line 1 and an 8-0 shutout win by Kirsten Price '21 and Keira H. '24 in line 2.

Chargers vs. Bradenton Christian School (BCS)
Our next victory was a tighter margin against Bradenton Christian School (BCS), 4-3. Lines 1 and 2, Wynn Bryant '20 and Kirsten Price '21, came up against some tough competitors who bested our players at 8-3, and 8-4, respectively. The matches were well played and every point for both competitions was hard won on both sides. Our lines 3, 4 and 5 bested their opponents to negate BCS’ line 1 and 2 wins: Adyson J. '25 beat her line 3 opponent with an 8-4 victory; Sofia Marston '21 won with an 8-5 victory while Keira H '24 had a super 8-1 win in line 5.

Our doubles’ teams had a loss and a win, with line 1 Wynn Bryant '20 and Adyson J. '25 losing a tough 8-1 match with strong rallies belying the lopsided score. While line 2 Sofia Marston '21 and Kirsten Price '21 brought home the match for the Chargers with an 8-3 victory. Playing a third line were Samantha Miller '23 and Marina Erwin '21 who handily took home a win at 8-1.

Chargers vs. Academy of the Holy Names (AHN)
Next up was a tough 6-1 loss at the Academy of the Holy Names (AHN) at the Hillsborough Community College Tampa courts. Line 1, Kirsten Price '21, was down much of the match but came down to a close loss score of 8-5. Kirsten had a slow start but had a brilliant comeback showing true grit that would likely have had a different outcome if a factor or two had been different. In line 2, Keira H. '24 also fought her way through a tough match playing against a very seasoned high school junior. The 8-0 score is not indicative of the long points during the match.

Our only victory of the day was Emily Forney '22. Emily’s ready grace and steadiness on the court was extremely evident in this match as she had no trouble wearing down the confident competition with a final score of 8-3, Chargers. Mya Plotkin '22 lost a long battle at 8-4, but each point in this match was hard won or lost. Mya never quits and her perseverance and winning strokes gave her opponent a great deal of competition. In her varsity singles debut Samantha Miller '23 lost line 5 in a lengthy 8-3 competition that was again a match whose scores did not indicate how well Samantha played in her varsity singles' opener.

Our doubles teams also lost tight matches that could have gone either way. Line 1, Sofia Marston '21 and Kirsten Price '21, were neck and neck against their opponents and took it all the way to a third-set tie break that ended in a 7-3 loss for the Chargers (Final score 9-8, TCS). Sofia and Kirsten’s fluidity as a doubles team is a great example of the trust and communication that is truly required in tennis doubles for long-term success. Line 2 was also a back-to-back match with Mya Plotkin '22 and Emily Forney '22 losing 8-6 in a very long battle against two very seasoned players.

Chargers vs Tampa Catholic (TC)
At this week’s match at our home courts (St. Pete Tennis Center), we earned another victory with a 5-2 win, this time against Tampa Catholic (TC). Like the ODA match, Lines 1 and 2, Wynn Bryant '20 and Kirsten Price '21, respectively, both won their singles’ competitions mercilessly: this time with decisive and quick 8-0 victories. In line 3, Sofia Marston '21 beat her competitor with an 8-2 win to give us three quick W’s on our score sheet. Adyson J. '25 made another strong showing with an 8-1 win in line 4. Returning player Lindsey Leonhirth '20 line 5 lost her first match of the season at 8-2, but the score was not indicative of the rallies on the court. Just back from state soccer finals, once Lindsey’s nimble soccer feet are in full tennis-mode we are sure she will show her opponents her full game. Mya Plotkin '22 played a sixth singles line and while she lost 8-4, as always it was delightful to watch the grit she shows on the court while always smiling.

Our number 1 doubles team lost in a heartbreaking 10-point tie breaker. Marina Erwin '21 and Wynn Bryant '20 were ahead much of the match until the opponents dialed it up to bring it to an 8 all score. Our players fought long and hard and had the extra burden and distraction of the entire opposing team close to the fence loudly cheering and yelling during the tie break. TC finally won the tiebreaker at 10-8. This was the first match for Marina and Wynn together and to learn one another's game. No doubt they will be victorious the next time with this experience in their tennis arsenal.

Chargers, come out and support your tennis teams while they play! Our remaining schedule and the addresses are on the school website.

*Scoring style used for these competitions was an 8-game pro set match with Ad scoring: The team reaching 8 games first is the winner, with a required margin of 2. For example, if the match is at 8 -7, the leading team would have to win the 9th game to win by a margin of 2. If the teams both reach 8, they play a 10-point tie break as occurred in several of the matches. Scoring format can changed depending upon available courts, time constraints, etc.