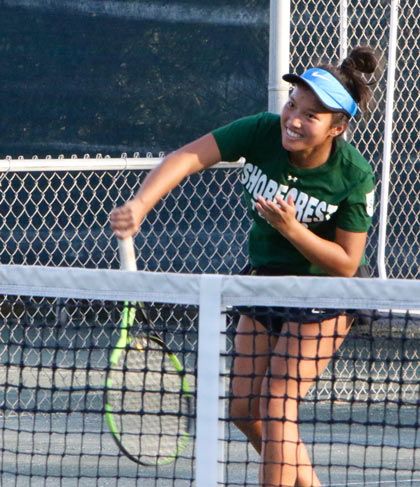 Published 3/12/2020
by Coaches Cobb and Stover
The Chargers Girls’ Varsity Tennis Team continues to claim victories, with the most recent ones being back-to-back wins against Calvary Christian.

The Chargers met CCS on March 5 at their home courts at the St. Pete Tennis Center, and were the decisive 6-1 victors. Line 1 Wynn Bryant '20, showed her dominant strokes against a very determined competitor who Wynn beautifully wore down for an 8-5 final score. Kirsten Price ‘21 met her opponent with vigor in her usual steady and versatile style, bringing home an 8-6 win. Position 3 Sofia Marston ‘21 did not bring home a victory, her match was a witness to true grit and grace under pressure. Despite some challenging circumstances, Sofia, a tough and stoic competitor on any day, met the challenge head on and will surely best this one in the future.
As predicted last week, the now ‘warmed up for tennis’ Lindsey Leonhirth ’20 showed her tennis mettle after being down in the beginning of the home match - but not for long. Her final score of 8-6 showed the opponent that once Lindsey warmed up she meant business! In 5 singles was Samantha Miller ‘23, who also brought home her first varsity singles victory. The final score was 8-6.
Both doubles matches were an excellent show of teamwork and a mix of back and forth well-placed volleys, overheads and aggressive groundstrokes. The number 2 team included Marina Erwin ‘21 and Lindsey Leonhirth ’20 (their first time playing together.) The pair easily exhibited to their opponents that they are a winning combination. The nice 8-5 final score followed some outstanding points that truly kept a growing number of spectators riveted. The number 1 doubles slot included Wynn Bryant ‘20 and Kirsten Price ‘21. The match was a thrilling attenuation of their respective singles competitors that lasted into the dark, and eventually necessitated a move to a court with full lighting. They too kept a tired and hungry group of spectators from leaving as their eyes were glued to the court until the final winning Chargers tennis stroke. Final Score, 8-5, Chargers.
Can anyone say SWEEP? The Chargers met Calvary again on March 10, but this time at Countryside Country Club. The Chargers showed little mercy to our kind hosts and had victories on every court.
Both Wynn Bryant ’20 and Kirsten Price ‘21, in lines 1 and 2, met against the same singles competitors they played and beat last week. This time, however, their scores were not nearly as close! Despite some long, impressive points on both sides, Wynn  swallowed up her competitor with a decisive 8-3 win. Kirsten’s opponent clearly pushed hard in the beginning to nullify last week’s loss, but she was no match for the ever perseverant Charger who bettered last week’s score to an 8-5 victory. Go Kirsten!

In line 3 was the lioness Keira H. ’24. The determined eighth grader bested her opponent with a continuous smile on her face, by deftly using her arsenal of varying strokes while maintaining the perfect patience for softer balls at exactly the right moments. She also hit the ball like a speeding bullet at the other right moments! Keira’s 8-5 win showed that once she took full command and pulled ahead, the match was hers to take. Our next win was Adyson J. ‘25, who once again impressed with a solid 8-1 victory against a much older player who was likely surprised how much punch this dynamo dedicated to winning a match. Lindsey Leonhirth ’20 looked relaxed and calm, but the masterful control she showed during each point earned her a solid 8-2 win. Emily Forney ’22 showed her usual elegance and prowess on the court with another 8-1 singles win. Emily’s opponent left singing her praises, showing again Emily's goodwill and essence of being a true Charger diplomat.

Our doubles teams also gave little mercy to their competitors. Sofia Marston ‘21 and Kirsten Price ‘21 gave their opponents little chance for victory once they took the lead. Final Score: 8-4. Wynn Bryant ‘20 and Keira H. ‘24 rounded out the win with a resounding 8-0 sweep of the other team - in very short order.
We appreciate all the supporters who have come out to watch our teams. We are proud of this talented group of young women who continue to get the job done. Each of these players has what it takes to win in many positions, indicating a depth that we will continue to capitalize. Win or lose, these ladies know that this is a sport for life, too. And winning sure is fun! Thank you Charger Community!
Up Next:
Please come watch the Chargers continue to soar. Both girls and boys Varsity teams play the next three matches at St. Pete Tennis Center at 4 pm.