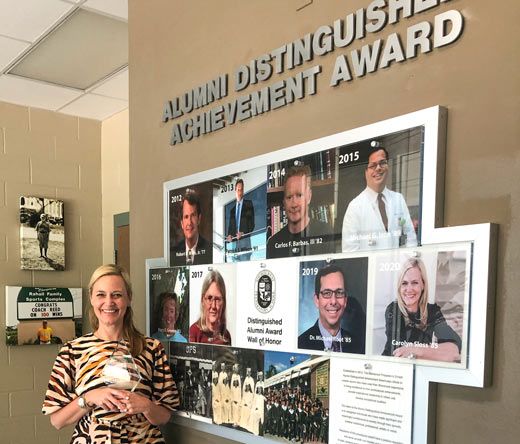 Published 3/12/2020
by Stacy Alexander, Director of Alumni and Community Engagement
On March 6, during an Upper School Assembly, Carolyn Sloss ’85 was presented with the 2019-2020 Shorecrest Alumni Distinguished Achievement Award.
Established in 2012, the Shorecrest Preparatory School Alumni Distinguished Achievement Award pays tribute to notable alumni who have used their Shorecrest experience to bring excellence to their professional achievements, provide inspirational leadership to others, and develop exceptional qualities.
Throughout her years at Shorecrest, Carolyn Sloss ‘85 demonstrated leadership. She served on Student Council as Vice President, the Homecoming Committee, Interact and Junior Exchange Club (just to name a few). Carolyn has continued those leadership skills into her career as an award-winning communications professional for Allied Global Marketing, an entertainment, lifestyle and hospitality agency with 22 offices worldwide.
After graduating from Shorecrest, Carolyn attended Auburn University and received her Bachelor of Arts in Journalism. In 2001, she launched Allied Global Marketing’s first office in the South. As Vice President, Field Marketing, her responsibilities include running the Atlanta office with 30 employees as well as national account management and strategic planning. She oversees the agency’s film, TV, hospitality and lifestyle clients in the SE including Paramount Pictures, Walt Disney Studios, Universal Pictures, Warner Bros., Netflix, Fox Searchlight, Screen Gems, A24, Coca-Cola and Cirque du Soleil. Additionally, Carolyn serves as senior counsel for Turner Broadcasting projects and plays a key role in the company’s new business development.
Earlier this year, Carolyn was named one of Atlanta’s Top 500 Business Leaders by Atlanta Magazine and honored by the African American Film Critics Association (AAFCA) as part of its 8th Annual SYNERGY Program. AAFCA recognized Carolyn for “leading the growth trajectory of the film and entertainment community in Atlanta". In addition, the AAFCA lauded Carolyn’s “commitment to the Arts & Entertainment scene has been impactful to the permanent infrastructure that we see today throughout this region.”
Carolyn always finds time to volunteer and lend her talents to nonprofit organizations that are meaningful to her including the Atlanta Film Festival, the Girl Scouts of Greater Atlanta and VOX Teen Communication. At VOX, she helps with fundraising and coaches teens at the after school program which teaches journalism, publishing and self expression. VOX recently named Carolyn an inductee in their 2019 Hall of Fame class.
The intent of the Alumni Distinguished Achievement Award is to recognize individuals who have made significant and meaningful contributions not only in their profession, but in society. It is clear Carolyn has used her Shorecrest experience to bring not only excellence in her professional achievements, but also provide inspirational leadership to others. With her career successes, service and meaningful contributions to her community, Carolyn can now add Shorecrest Alumni Distinguished Achievement Award recipient to her long list of accolades and accomplishments.
The Upper School students learned of her hard work and determination to career success and her commitment to giving back and providing for others. It was a wonderful presentation with words of advice, celebrity publicist behind the scenes stories and bonus goodie bags of popular film swag for each student!