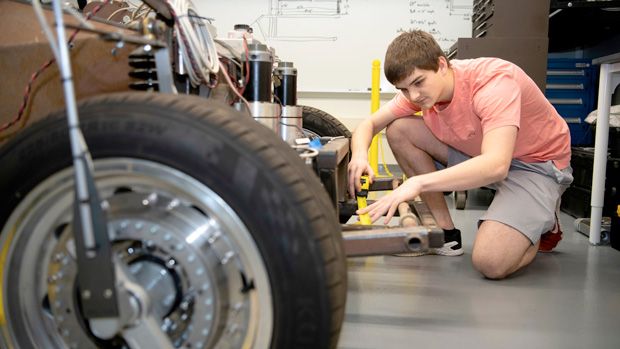 Published 8/10/2020
by bucknell.edu
"...Doing something impactful early on was important to me. It allows me to show future employers that I have the will and the ability to go out and use my knowledge from day one."

All it took to set Graham Heckert '19's future in motion was one test drive.

A few years ago, Heckert's father was in the market for a new vehicle, and on a lark decided to test drive a Tesla, taking Heckert — who wasn't yet old enough to drive — along for the ride.

"It was fantastic — feeling the pure acceleration from zero to 60 is a ridiculous experience, and knowing that this new technology has gotten as far as it has in such a short time just blew me away," Heckert says.

His father didn't end up taking the Tesla home, but Heckert was hooked on electric cars. As he began to see the connections between the emerging technology and the concepts he was learning in his high school science classes, he realized he could do more than drive one himself someday.

"I started to understand that I don't just have to cheer from the outside — I could be a person who actually designs this stuff," he says. "I could use my knowledge and apply it to work with electric vehicles."

The opportunity to start working in the field right away was one of the main things that brought Heckert from St. Petersburg, FL, to Bucknell University. He knew he wanted to attend a smaller school where he wouldn't be lost in a crowd, and through a Presidential Fellowship, Heckert got the chance to begin working on an electric car from his first year on campus.

He's now using his fellowship to work with a custom-built, electric research vehicle in the lab of Professor Craig Beal, mechanical engineering. Heckert started out by redesigning the car's cooling system with design software (while there is no combustion, batteries and electrical components still produce a lot of heat), then helped install it and other systems by hand. He says he loves being able to see the outcome of his work happen so quickly.

"We're not just tinkerers; we're engineers, which means that we do everything theoretically first so that it works the first time," he says. "I learned that early on."

Heckert admits he still has a lot to learn, but he's taking every opportunity to build his skills in and out of the classroom. He wants to spend at least one summer doing undergraduate research in Beal's lab and is also seeking internships with electric vehicle manufacturers (maybe even Tesla).

"It's a simple matter of me saying that I've got this goal," he says. "Nothing's ever easy, but the fact that I love electric vehicles so much means it's never a problem for me to put in more time to understand, learn and develop."