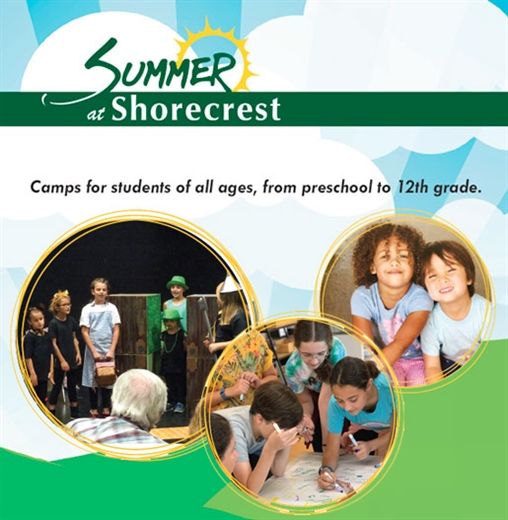 Published 3/1/2021
by Shorecrest Auxiliary Programs
Shorecrest Summer Programs are planned to run June 7 - August 6, with full day and half day camps, including before care and after care. Programs are available for campers from age 3 through 12th grade. In-person camps and programs are expected while maintaining the health and safety precautions necessary.

Specialty camps run each week, and general day camp is all summer long! From ooey gooey experiences, to sports, STEM, theatre and robotics -- a variety of fun programs will give campers a great summer!!

Chess Camp for ages 5 – 16, Introductory to Advanced.
The staff is comprised of the finest children's chess instructors in North America. Registration options include mornings, afternoons, and all day sessions. Campers experience chess instruction and play in a fun-filled environment designed to improve their skills whether they are interested in casual or competitive Chess. Tuition includes a trophy, a chess set, and much more.

Minecraft Modding, Networking and Hosting  for ages 8 – 16.
Minecraft is hugely popular because it is a collaborative, open-ended, and moddable program. Our program promotes those qualities for a week of fun! The week begins with learning the game, controls, recipes, and a bit about hosting & networking. Next, campers connect to different worlds hosted on our secure server and experiment with character skins, mods, and custom maps. By day three, campers will build in the Active Learning World that grows over time. Whether adding a room, making a moat, or even creating a chessboard, the possibilities are nearly limitless. As with all of our game creation options, this camp encourages creativity, storytelling, programming, and problem solving for their young minds.

Video Game Creation – Platform Style – In the Style of Sonic & Mario for ages 8 - 16,
Introductory to Intermediate.
Campers will build a game described as a "platform" game like Sonic or Mario. Children have a blast as their characters overcome obstacles and opponents and then conquer the Big Boss. The character progresses on a long path/journey with the background scrolling behind it as adversaries, prizes, and obstacles are encountered along the way. Lessons on the basics will be similar to the Arcade course in the very beginning, but the class diverges, and different programming techniques are taught in order to build this Platform game.

Video Game Creation – Arcade Style – In the Style of PacMan & Asteroids for ages 8 – 16. The Arcade course is a program where the game that is created has the action for each
level all on one screen, similar to Centipede, Asteroids, or PacMan. Campers create a main character, which can be anything their imagination can think of. Other characters, or enemies, pursue the main character who dodges their attacks. The character will score points for picking up objects and destroying the enemy objects. Options are endless, and children create level after level for a full week of fun. As with  all of our game creation options, this camp encourages creativity, storytelling, programming, and problem solving for their young minds.

Read more details, view a list of camps, and register online at: www.shorecrest.org/summer.