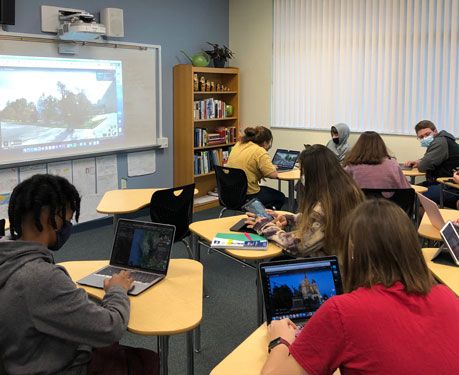 Published 1/15/2021
by Kayla Brazee, Upper School History Teacher
After learning about the early Russian Empire, ninth grade Global Studies classes are taking virtual trips to Moscow, Russia, for five days. They learned about Moscow being founded after the Russians broke free from Mongol rule in the 1100’s, and that now Moscow is one of the largest and most historically significant cities in the world.

In small groups, classmates are working together to create detailed travel logs of their time in Moscow. They are using Google Earth and Google Maps to “visit” Moscow’s major historical landmarks, tourist attractions, walk around the city, find restaurants, and observe modern Russia.

Students are sharing their "travel memories" digitally in logs which will include a list of places they visited each day, observations about Moscow/Russian culture and weather, restaurants where they dined and what they ordered, hotels where they stayed, and a virtual photo album of their trip.

"Chargers are having a blast walking the streets to find stores, restaurants and parks of interest, and also going inside huge landmarks like the Bolshoi Theater. Linking the past to the present is very important, and I'm glad they're able to do that with this project," shared Upper School History Teacher, Kayla Brazee.