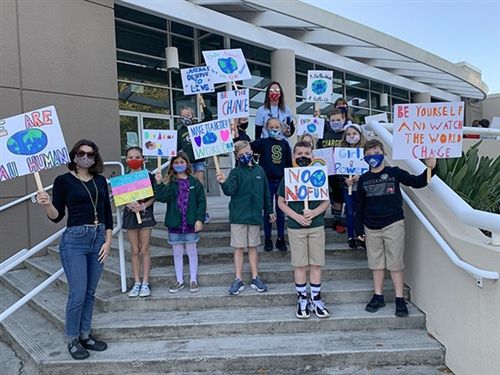 On January 22, the Shorecrest Lower School was invited to attend a Children’s March for Social Justice. As K-4 classes followed the route around campus to each of the QR codes, teachers scanned them to share the stories with their students. Each grade took their time to stroll the March route, listen to the featured songs and biographies, and see all of the signs third graders made to represent their passions as Changemakers.

Dr. Bianco, Head of Lower School remarked of the March, "I marched with Mrs. Owen’s class. I loved how the children remembered and talked about last year's March. They also made great connections to the visuals and stories shared along the walk, which went from the Charger drop off area, around the flagpole in front of the JRT, along the front of Charger Commons, and back to the classroom. Along the walk students chanted, 'Be kind to everyone, be kind to everyone...' I couldn’t agree more."

Although the Lower School was not able to come together as one, big group this year due to social distancing restrictions, everyone felt inspired to follow their hearts and use their voices to make the world a better place.

As Jane Goodall once said, "You cannot get through a single day without having an impact on the world around you. What you do makes a difference, and you have to decide what kind of difference you want to make."