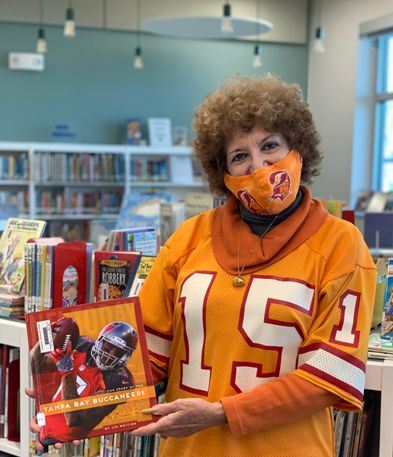 The Thrill of Victory

Published 2/5/2021
by Nancy L. Spencer, Head of School
Anyone who has watched my installation video from last August knows that I am a huge fan of Broadway musicals. However, I also love watching sports. Clearly the St. Petersburg-Tampa Bay area is a great place to be a sports lover, especially this weekend as we cheer on the Tampa Bay Buccaneers who will play the first Super Bowl in a hometown stadium. I love watching a group of athletes working together to achieve a goal, feeling the intensity of competition, and observing (to date myself) “the thrill of victory and the agony of defeat.”
While I love watching all kinds of athletic competitions, I especially enjoy professional football. I grew up in Washington, D.C., in the days when the city’s football team was in the height of its glory; passion for the team ran deep. I remember “Dallas Week” and talking about the upcoming game versus the rival Dallas Cowboys during elementary school recess. And oh, did we hate the Cowboys! Tickets to hometown games were almost impossible to get, so most of my experience was watching football on TV, with kickoff at 1pm on Sundays. I only saw one in-person game at the old RFK Memorial Stadium. It was a crisp autumn afternoon and the stadium rocked as Joe Theismann led the team to a 50-3 victory. (Fun fact: the football stadium named for Robert F. Kennedy was located in downtown Washington, D.C., and is geographically aligned in a perfect straight line with the Lincoln Memorial, the Washington Monument and the U.S. Capitol building.)
It’s been a while since I have followed Washington, D.C. sports teams closely. During the past fifteen years, I lived in central Connecticut where there is almost an equal split between New England fans and those who support New York City athletic teams. I tried to stay neutral when heated debates broke out about the Red Sox versus the Yankees. And everyone had an opinion when the New England Patriots played the New York Giants. I will admit that Patriots fans who consistently predicted (and often got) the wins could be irritating. Their expectation was that they deserved a dynasty, and they let everyone else know it.
However, I have the deepest respect for Tom Brady, the longtime quarterback of the Patriots. I admire his intensity and work ethic, and I am impressed with his longevity as an athlete. I was thrilled to learn that he would be joining the Tampa Bay Buccaneers and moving south, right around the same time that I would be. I admire his entry plan: the way he calmly started his new job while moving his life and his family, in the middle of a pandemic. Brady has worked hard to get to know the culture of his new community and develop relationships with his teammates. It’s gratifying to see his efforts pay off.
Being new to the Tampa Bay area, it has been a joy to see how enthusiasm for the many area athletic teams can unite a community. It is wonderful to see Shorecrest students, faculty and staff in Lightning, Rays, Rowdies, and Bucs attire on Spirit Days. It’s interesting to note the many successes of Tampa Bay’s professional sports teams coincides with my arrival in the area. Of course, I am in no way claiming any connection – it clearly is simply a lucky coincidence!
As for this weekend’s game, I hope that everyone enjoys the Super Bowl (and the commercials!) in a safe and responsible way. Go Bucs!!
All the best,