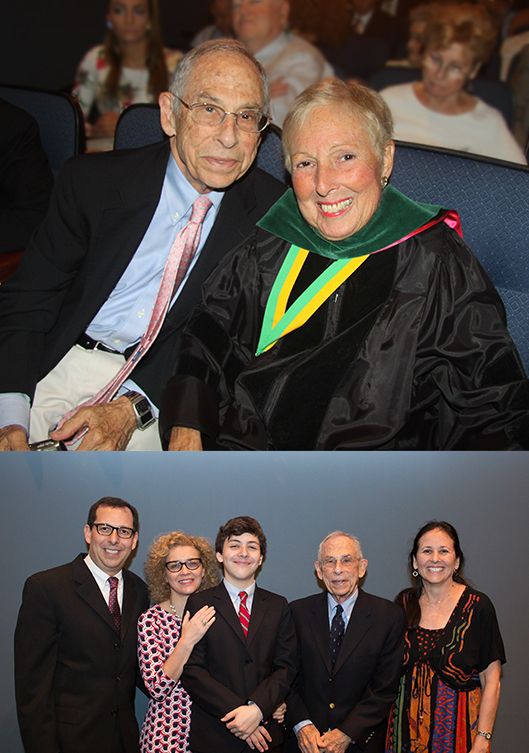 Published 2/25/2021
by Olivia Segalman, Director of Donor Relations and Advancement Services
This week’s Contributing Chargers are Dr. Allen Root, husband to former chair of the Arts and Humanities Department Janet Root H'16, and their family - Jennifer '81, Michael '85, and Jonathan. The Roots continue to support the foundation of success that Janet created during her 40 year span of volunteerism at Shorecrest.

As we approach our fourth giving day, celebrating visual and performing arts on March 18, it is important to acknowledge the contributions of the entire Root Family and of Janet Root H'16, an integral member of the Shorecrest community for over 30 years.

Janet started as a parent volunteer at Shorecrest in 1978, and developed the school’s cultural enrichment program. She was later elected to the Shorecrest Board of Trustees in 1981. In 1984, the Shorecrest Parent Association (now the Shorecrest Community Association) created the Janet Root Volunteer of the Year award to recognize the parent or parents who best model her spirit of volunteerism.

During her tenure, former Head of School Mary Booker Wall asked Janet to Chair the Arts and Humanities Department. Janet agreed and worked for years in this role without compensation, where she devoted her time and energy to creating a robust, school-wide program. Much of the success and growth in the visual and performing arts at Shorecrest can be attributed to Janet Root’s leadership.

In 2002, the 600+ seat, state-of-the-art Janet Root Theatre opened its doors. With a stage size comparable to professional theatres, fantastic acoustics, real dressing rooms, good sightlines, and a black box rehearsal theatre on the side, the new facility embodied the Root family’s collective desire for a performance space that would match the quality of the education and artistic opportunities being offered at Shorecrest.

The Root Family also established the Janet G. Root State of the Arts Endowment in 2015, for the sole purpose of providing funds to maintain the interior of the theatre and art gallery, including but not limited to refurbishment, repair, or renovation of the existing seating, carpet, interior fixed furniture or fixtures; or expansion of the seating capacity or stage area.

This spring the School will complete the construction of the Weiss Family Pavilion — an outdoor meeting/performance venue in the Greenspace of Charger Commons. This Pavilion will also include the future home to the Janet Root Circle for Visual and Performing Arts, an outdoor ‘home away from home’ for many of our performing arts students.

As we think about students of today and tomorrow, the name Janet Root and the legacy she, Allen, and their children built together will always be considered as a cornerstone of Shorecrest's foundation. We ask that you join the Root family in celebrating visual and performing arts at Shorecrest by participating in the Shorecrest Fund. To learn more about the Shorecrest Fund click here.