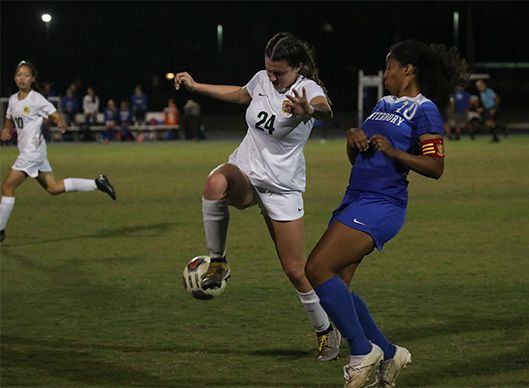 Published 2/24/2021
by Coach Idinge
Shorecrest Chargers Girls Varsity Soccer played in the 2A Regional Finals this week. It’s tough to travel for any competition, but it’s not new to this team. There were more away games than home games, but finishing the season on another team’s turf really stings, especially a team that we played in this exact same Regional Final game last year.

The Chargers were down by two goals at half-time, scored a goal early in the second half and battled their way toward making this a season-ending game to remember. For a team that doesn’t head the ball often, scoring the second goal from a header was tremendous. Thanks to Sonoma Kasica '24 in goal for keeping us in the game. They left their heart on the field and the final score was a 2-3 Loss to Canterbury Fort Myers.

The team finished the 2020-2021 season with a 7-6-1 record and a sense of pride for all they accomplished in a crazy year and a winning season.