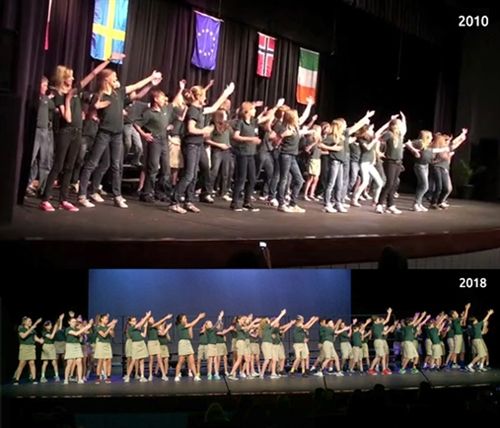 Published 3/18/2021
by Laina Bennett Coburn, Director of Philanthropic Giving
Whether it is the Lower School’s Poetry in the Park, the Upper School’s evening of one-acts, or Celebrate the Arts week each spring, there are so many incredible traditions surrounding the visual & performing arts at Shorecrest for everyone in our community to enjoy.

One special tradition that has brought delight to students and their families over the past decade has been the Glow Eurovision flash mob dance—taught by Middle School’s Music & Chorus Teacher, Stephanie McCarthy.

“Since my first year teaching in 2007, I would share clips with my students from the Eurovision song contest to teach them about world music and about how to be creative and imaginative with their performances. They were always so excited to learn that this huge contest, with over 200 million viewers, was relatively unknown in the United States.

In 2010, Eurovision was hosted in Oslo, Norway, and they introduced a flash mob dance as part of their halftime entertainment. They allowed people to download the song for free, learn the steps online, record themselves at home, and then upload it as part of a huge international project. Our sixth grade class (the future Class of 2016) decided to participate and we were almost featured on BBC News because it was so unusual for a school from the USA to know about (and love!) the Eurovision Song Contest.

That year we decided to incorporate the Glow dance into our end of year performance as a finale. Everyone loved it! The parents loved the connection to the contest—especially for some of the international families who were happy their children had an opportunity to learn about it.

From there, it became a beloved tradition for each sixth grade class. They would learn the steps and we would perform it at various times throughout the year—including at Relay For Life. In the evening there would be a moment where the song would blast across the field and you could find students from sixth grade all the way up to seniors dancing. They all loved how their siblings or older friends had done it before them and could come together in such a fun way -- by dancing!”

Help celebrate and uphold visual & performing arts traditions by making a gift to the Shorecrest Fund at www.shorecrest.org/give.