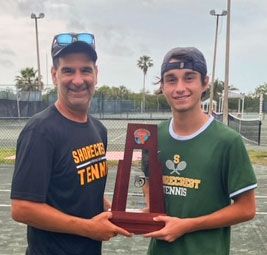 Published 4/16/2021
by Coach Bob Davis
Congratulations to the Chargers Varsity Girls Tennis Team for clinching the FHSAA 1A District 10 Championship yesterday! They won by 1 point over Clearwater Central Catholic - and it came down to the wire for the girls, specifically the results of the Girls #2 Doubles team and the #5 Singles Final match.

"As far as results - they were outstanding! We won the finales at 3, 4, 5 and 2 doubles lines which is really remarkable. We are on to the Regionals on Tuesday; a home match at St. Petersburg tennis center," shared Coach Del Zoppo.

Congratulations to the Boys Varsity Tennis Chargers who finished Runner-Up in the 1A, District 10 Championship, behind Calvary Christian. The boys lineup at the #1, #2 and #5 singles all advanced to the finals, with a win at #2 singles by Stefan Bilanovic '23 and the #1 doubles team of Stefan and Tyler Del Zoppo '21.

"The boys doubles won the District title. Stefan Bilanovic '23 and Tyler Del Zoppo '21 move directly to States. And we had a finalist in the #1 boys singles. These are remarkable results for both teams. I'm not sure when both teams at the same time had these kind of results," Coach Davis excitedly reported.
Both teams will advance to Regional competition on Tuesday, April 20. The girls will host their Regional opponent at the St. Pete Tennis Center and the boys will likely be traveling to their opponent, TBA.