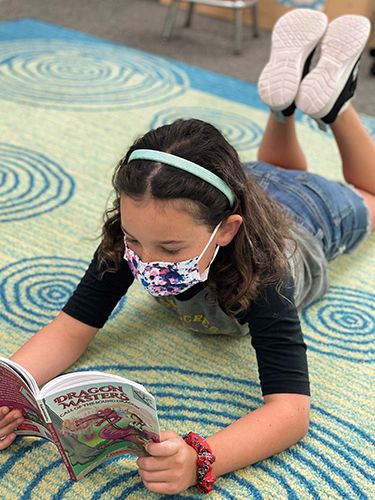 The Transformative Power of Education

Published 4/23/2021
by Nancy L. Spencer, Head of School
I recently learned of the death of Dr. Vartan Gregorian, noted academic, past president of the Carnegie Corporation, and 16th president of my alma mater Brown University. Of his many career accomplishments, what stands out to me the most was his advocacy for the New York City Public Library in the 1980s. He championed the importance of libraries as integral to the values of America, and he identified the impact of reading and education as central to his own story as an Armenian immigrant. As someone who spent so many happy afternoons of my own childhood at my local library, the legacy of Dr. Gregorian resonates strongly with me.
In the 1980s, the New York City Public Library was in shambles. The overall system faced a huge financial deficit, local branches had been cut back to minimal hours, and the main building at 42nd Street and Fifth Avenue was a mere shadow of its former elegance, with the well-known marble lions, Patience and Fortitude, standing guard in front of a crumbling edifice.
Gregorian saw the situation as a challenge. He channeled his considerable energies and strong personality into convincing the political players and socialites of New York City that a library was not a frivolity, but an investment in a society’s past and future. “He reminded us that libraries were engines of hope that move people to worlds beyond themselves.”
At the time, he was in the news regularly with his appeals. He called a library “a sacred place,” telling The New Yorker, “Think of a lone person in one of our reading rooms, who has just read a book, a single book that has perhaps not been read in 20 years by another living soul, and from that reading comes an invention of incalculable importance to the human race. It makes a man tremble.”
His success was evident by the end of his tenure, in 1989, when Dr. Gregorian had raised $327 million in public and private funds for the library, placing it on a firm footing.
From 1989 to 1997, Gregorian was President of Brown University. He was credited for strengthening research, teaching and public service activities as well as tripling the university's endowment. At Brown University, he inspired tremendous loyalty in the people who worked closely with him and he adored the students. In 1997, Dr. Gregorian then assumed the presidency of the Carnegie Corporation of New York, the foundation created by Andrew Carnegie in 1911 to promote education and peace. After decades as a fundraiser, he became a benefactor, awarding grants for liberal arts education.
According to the New York Times, “Gregorian’s American immigrant experience also inspired his life work. In 1986, he was part of the inaugural class awarded the Ellis Island Medal of Honor that also included Muhammad Ali, Walter Cronkite and Donald J. Trump.”
“As an immigrant, like Andrew Carnegie before him, Vartan understood what it was like to see America through the eyes of an outsider; as an ardent student and teacher, he was passionate about the transformative power of education,” one author wrote in tribute. “Together, all of this and more, shaped his story, career, and legacy—and helped him shape the world for the better.”

“America invested in me and saw me as a citizen,” Gregorian wrote in 2018 to commemorate July 4 for the Carnegie Corporation. “It is a debt that I can never fully repay, though I have tried.”

When I think of Dr. Gregorian, I am reminded of the power of education to truly transform the lives of people - and how often that route runs through a library. It reaffirms the work that we are doing at Shorecrest, to reach out and impact students on this campus and in our larger community.
All the best,