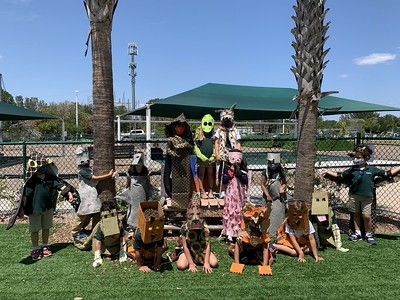 Published 5/6/2021
by Brenda Rosas, JK Teacher
Shorecrest junior kindergarteners were curious to learn about different animals and their habitats. They utilized a map from ZooTampa at Lowry Park as a guide to research a favorite animal and its habitat. Many of the young Chargers also visited the zoo with their families and recalled their experiences at school.

This investigation led the children to create plasticine animals to display in their classroom's representational map of ZooTampa at Lowry Park.

As the JK students approached the end of their habitat study, Ms. Trayer and Ms. Rosas asked them to reflect on their learning. Without hesitation, they began to list their favorite animals. At that moment, Ms. Rosas considered having the children design their own animal costumes.

To begin the process, the children drew a blueprint of themselves in their chosen animal costume. Their blueprints included a list of materials they would need such as buttons, fabric, and paint colors. Once the blueprints were finalized, they quickly got to work. Their creativity was observable as they painted, hot-glued fabric together, and added details to their costumes.

“The best part was witnessing the children collaborate as they helped each other bring their costumes to life,” said Ms. Rosas.

After the costumes were complete, Cole C. proposed the idea to share their outfits in a celebratory fashion show. Everyone agreed! Ms. Trayer gathered all of Alpha, JK, their siblings in LS, and other campus community members to cheer on the little ones as they walked a playground “runway” in their costumes. The children proudly strutted as Mrs. Hahn’s class played the drums and the crowd cheered.

“It was the best day ever,” said Bella S.

Ms. Trayer and Ms. Rosas were so impressed with the children’s creativity, resourcefulness, and confidence as they concluded their habitat study.

View more photographs of the costumes.