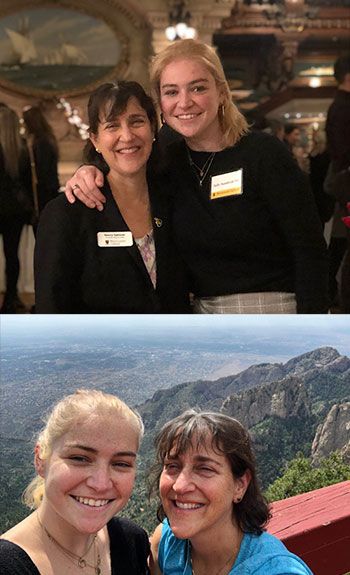 Published 5/7/2021
by Sally Sandoval
In honor of Mother's Day, I thought that it would be interesting to hear from my daughter, Sally Sandoval, in this week's Ebytes. Sally lives in New York City and works for the NBA. She is a graduate of Westminster School in Connecticut and Dartmouth College.

I’ve been around schools my entire life. The week after I was born my mom brought me into the Admissions Office at The Bullis School where she worked at the time as the Director of Admission & Financial Aid, so I never really had a shot at being normal. Our family even visits schools while we’re on vacation - which is actually the first time Mom visited Shorecrest. There was one point during my first two years of high school when I went to school with my whole family. My brother was two years ahead of me and both my parents taught at Westminster.
I know. Perpetual chaperones.
Westminster is a grade 9-12 boarding school that has day students, so technically I was a day student; but we also had a home on campus which put me in a liminal, in-between space. At Westminster, students of faculty are known as “fac-brats,” which is not a great start to trying to reinvent yourself in high school. I mean, Freshman year of high school is awkward enough; imagine someone you’re crushing has your dad as a teacher. Not to mention, the people now grading my papers have known me since I was 10 years old, so not many blank slates for impressions there.
One time, my friends were having a party at someone’s house and I was told I couldn’t come in case my parents found out, because the hosts didn’t want to get in trouble. (I heard it was a lame party anyway, whatever.) Senior year I took my mom’s class and I didn’t know what to call her: Mom? Ms. Spencer? Nancy?
It felt like every night the boarders were having some huge sleepover that was so much fun and they all got so close. And although proximity-wise I was close to it, I never felt like I could completely connect to that experience. TLDR: Boarders were cool and day students were kind of dorky.
But everything changed once I got my driver’s license. I swear the day I was able to drive a car I entered the Twilight Zone. I started noticing how much my boarder friends talked about missing their dogs, how homesick they were and wishing they could sleep in their own beds, let alone how much they yearned for the ability to drive a car anywhere they wanted. It felt very backward to me. Wait, now boarders are jealous of day students? You think I’m lucky because I get to see my parents every day? Keep in mind I was 16 years old at the time, so parents were not very cool.
I don’t think it was until about junior or senior year of high school that I started to realize that my boarder friends were right. I was incredibly lucky.
School is a place where you first learn how to create your own life, excavate your ethos, garner the tools to be independent, and test your ability to adapt in unfamiliar environments. I always thought I was hindered from having that opportunity purely because none of that existed in a vacuum for me: my school life was my home life. But not in the way it was for these boarders.
I got to go home and see my dog! My parents made me dinner! If I wanted to go to the mall, I could just go to the mall! The biggest thing I started to think about was how my friends who lived in the dorms saw their parents at most every weekend and at least every couple of months. For the longest time I thought that seeing my parents every day at school was going to be the downfall to my normality, but it ended up being one of the most normal things about me and my high school experience.
French Historian Fernand Braudel introduced this concept about the past and present illuminating one another reciprocally, as means of understanding perception. He says if you’re from France and live in London for a year, you won’t learn much about England, but you will learn a lot about France: because you have distanced yourself. After going to college where I was distanced from the fac-brat life I always knew, I understood how special it was to share that part of my life with my parents. Not everyone gets the opportunity to spend that kind of quality time with their parents; and you don’t realize it until you’re away from it. I’m so thankful that I got to be with my family during high school and I really appreciate the time I had with them.
As for what to call my mom while I was in her class, we both decided I would just raise my hand and try not to address her by any name. That didn’t last long.