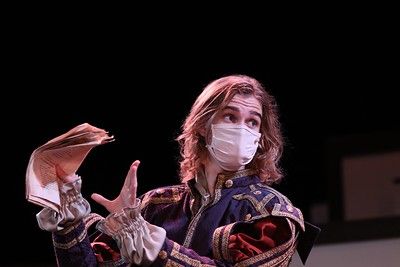 Published 9/1/2021
by Raffi Darrow, Ebytes Editor
During the 2020-21 school year, the Shorecrest Performing Arts production of the musical "Something Rotten!" was reviewed as part of the Broadway Star of the Future program presented by the David A. Straz, Jr. Center for the Performing Arts, an affiliation with the National High School Musical Theatre Awards (NHSMTA) or the Jimmy Awards®.  The show, cast and creative team received high praise from the judges and multiple award nominations.
Shorecrest Thespian Cían McCarthy ‘22 was nominated for Outstanding Actor in a Musical and represented Shorecrest in a performance at The Straz Center on Saturday, May 29, 2021. Only twelve students in the region were selected to perform at The Broadway Star of the Future Awards program sponsored by AMDA (The American Musical and Dramatic Academy, NY). McCarthy was humbled to be there as the only junior in a pool of senior and recent high school graduates.
McCarthy performed "Hard To Be The Bard" from "Something Rotten!" with live band accompaniment, and received the award for Best Actor in a Musical for his portrayal of William Shakespeare in the musical. He was also offered a $60,000 scholarship to AMDA.
The Straz Center presents the Tony-Awards®-inspired Broadway Star of the Future showcase annually to honor artistic excellence in Tampa Bay area high school theater productions, programs and students.


Photo: Cían McCarthy ‘22 as William Shakespeare in the Shorecrest Performing Arts production of “Something Rotten!” photographed by Steve Dupré.