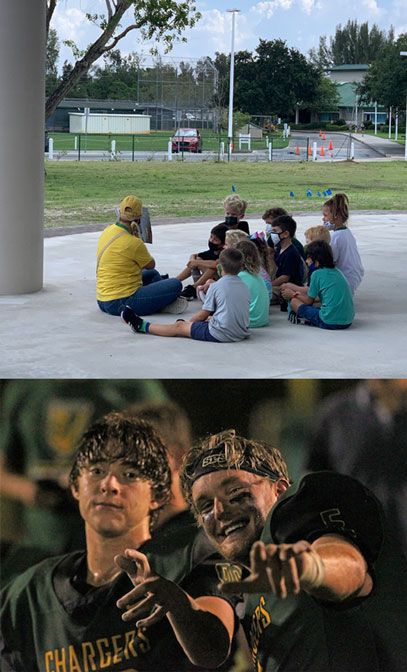 Published 9/3/2021
by Nancy L. Spencer, Head of School
With the completion of the first few weeks of classes, members of the community are settling into their rhythm and routines. There are so many scenes of campus life that I want to share. These vignettes are just a snippet of the student experience, but they offer insight into the essence of Shorecrest, as the new school year unfolds.
Each morning, I greet Alpha and JK students in their uniforms and green backpacks (which for some, seem to be half their body length!) I watch as little fingers work to click the front buckle of their backpack, something we encourage these young Chargers to do by themselves, to develop independence and fine motor skills. Experiential School students, accompanied by fourth grade patrols, head confidently toward their classrooms. They welcome the morning meeting routine, spend their days exploring and absorbing, and joyfully embrace the outdoors, whether swinging together on the tire swing, running around their playground or standing shoulder-to-shoulder, blissfully absorbed by the contents of the water table.
Lower School students are my new neighbors, as we share space in the refreshed Raymund Center. They wave to me on their way to Spanish class or as they continue to sing the songs they learned in their new Music classroom (with risers!) I watch, a little enviously, as they hold mammoth kickball tournaments before school and during recess. Weekly Town Meetings, held outdoors each Friday at 8:10am, bring the Lower School community together for songs, sharing and the recitation of the Pledge of Allegiance. As I recently wandered the campus, I joined a fourth grade class whose teacher had brought them outdoors for a midmorning snack and mask break. I listened to her reading to them, posing questions about the story, as the students responded, in between munching on popcorn and strawberries.
It’s hard to miss Middle Schoolers as they explode through the hallways and gather in groups during their break time. The fun and challenge of making new friends, mastering the daily schedule, and successfully taking one’s first quiz, is all-encompassing. Middle Schoolers relish the chance to walk over to Charger Commons for their robotics class and to use their makerspace (or as one JK student said, “the grown-up LEGO table.”) There is so much excitement for new opportunities with interscholastic sports and after-school clubs, along with play rehearsal for “Annie Jr.”  And of course, there is the joy of lockers and much enthusiasm for using the panini machine at lunch! The Hess Library is full of Middle Schoolers during their after-school study hall, as they gather to study and do homework.
Upper Schoolers have fully moved into the second floor of Charger Commons; they occupy spaces and places all throughout the building. When they are not in their math classrooms, they might be hanging out in the Ohana Community Room, gathering in the Hess Library stacks, sprawled on beanbags or sitting along the window seats. The study rooms are fully booked, as students work independently or in small groups. Upper Schoolers gather at the high-top tables along the hallways or hang out working on a jigsaw puzzle at the DEI office with Mr. Fludd. Landy Hall isn’t forgotten, as seniors stop in to the College Counseling office, ramping up for the twelfth grade phase of the college application process. Ninth graders are figuring out how to be better organized, aided by newly required hard-copy planners. The weekly Morning Meeting provides a sense of community and fun for the Upper School, as the different grades compete in games to earn spirit points.
School spirit was on full display at the first football game of the season. It was a perfect Friday evening for our first home game, a little humid with a breeze, as the sun was setting. The stands were full with an enthusiastic crowd, dressed in Shorecrest spirit wear. There were lots of little children with lightning bolts painted on their faces, clutching their chips and sodas, all yelling in support of Shorecrest. With its graceful gymnastics and stunts, the cheer team led the crowd with waves of roars, as our running back swept past a defender, or a Chargers linebacker sacked the other team’s QB. It was a magical night, made even better when our Shorecrest football team earned their first victory.
There is so much to be excited about at Shorecrest! Our sense of community continues to thrive and is enhanced by our ability to gather on campus once again. I am excited to see families at the upcoming SCA coffees on September 10 (ES/LS) and September 17 (MS/US) from 8-9am in the Ohana Community Room on the second floor of Charger Commons. I look forward to hearing your favorite scenes of a Shorecrest school day!
All the best,
Nancy