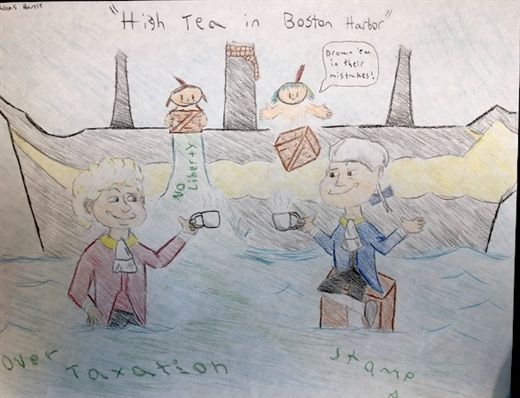 Published 10/1/2021
by Kayla Brazee, Upper School History Teacher
Shorecrest Upper School students in Mrs. Brazee's U.S. History Honors classes recently started a four week exploration of the American Revolution. To understand the causes of the Revolution, namely the role of the Boston Tea Party, students were asked to create a political cartoon based on the December 20,1773, “Boston Gazette” headline "High Tea in Boston Harbor."
To support the assignment, the Chargers first learned about political cartoons and considered themes such as irony, symbolism, satire and bias when viewing modern-day examples. From there, they were asked to create their own political cartoon by hand. All cartoons had to have a combination of text and illustration, a clear message, and had to be told from the perspective of either the American colonists or King George III of Britain.