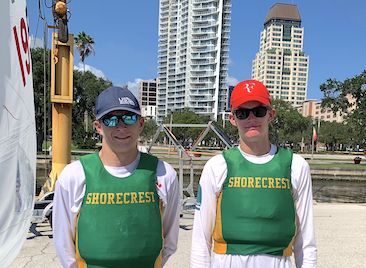 Each district across the country can send only 3 sailors to the national championship.
The SAISA District (the region encompassing the southeastern United States and the Caribbean) held qualifying regattas at the St. Petersburg Sailing Center the weekend of September 25, 2021. Over 50 top sailors from 35 schools were present and the competitors encountered fair weather, calm seas and light winds.

Shorecrest's Guthrie Braun ‘22 dominated the Laser Standard Rig Class (ILCA-7), placing first in all but one of the races and coming away as the overall winner of the regatta! Ethan Danielson ‘22 placed third overall, which means Shorecrest will have two sailors competing for the national championship.

The Chargers sailing team will kick off it’s double-handed season next week in Miami. With both varsity skippers returning and an influx of new talent, the team is hoping for some great results.