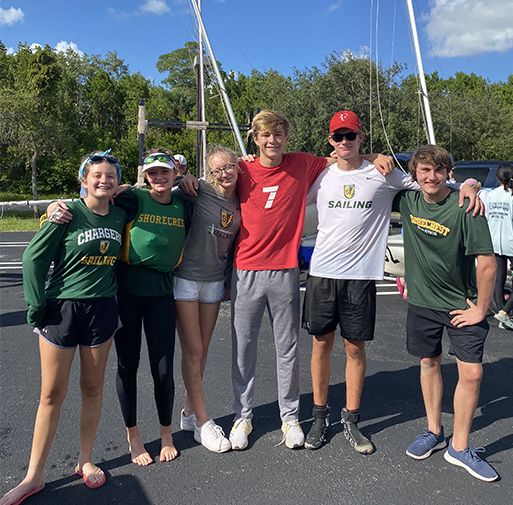 Published 10/7/2021
by Ethan Danielson '22
The Shorecrest Chargers Varsity Sailing Team opened its fleet racing season by placing 2nd of 17 schools at the SAISA South Points 1 regatta.
The event was sailed in Miami at Bear Cut. The heavy breeze and strong tides challenged all the competitors, and it made for exciting racing.
In the A Division, Guthrie Braun ‘22 took third place. He sailed the first four races with his sister, Ainsley Braun ‘25, and then he won the last two races with Danny Drysdale ‘22 as crew. Meanwhile, Ethan Danielson ‘22 finished 2nd in the B Division with Kate Danielson ‘24 as his crew. Their consistent performance was enough to give Shorecrest a comfortable margin for a 2nd place finish overall. Morgan Shirey ‘24 served as an alternate crew for light air.
The next event in the series will take place in three weeks, and the team is looking forward to continuing training and getting some of our newer sailors up to speed with Coach Fedyszyn.