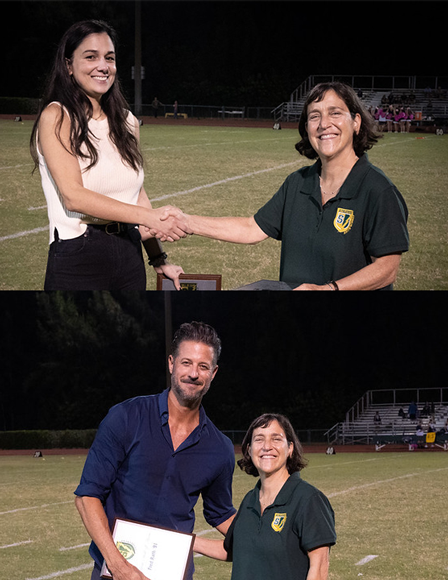 Published 10/25/2021
by Stacy Alexander, Director of Alumni and Community Engagement
Before a packed crowd at the Homecoming Football Game on Friday, October 15, 2021, Jim Vigue ‘89, Chair of the Shorecrest Athletic Hall of Fame, introduced two of the four 2020-2021 Athletic Hall of Fame Inductees.
The Shorecrest Athletic Hall of Fame was established by the Shorecrest Alumni Association & Athletic Department in 2009 to recognize athletes, coaches, teams, leaders and volunteers whose contributions and achievements have improved Shorecrest’s reputation in sports, brought credit to the school or inspired others to their own personal level of excellence. The Shorecrest Athletic Hall of Fame provides an inter-generational link between past athletes, coaches, teams and leaders and today’s and tomorrow’s students.
Taylor Tremaine '07 was the 2006 Fran Risser Female Athlete of the Year. She excelled in Soccer, Track and Field and academically. Named 1st Team- St. Pete Times All Academic Team for soccer, she was part of the Girls Soccer Team that made state final appearances in 2006 and 2007. Taylor also holds the school record in the Girls 4 x 400 relay. With her successful career on the soccer field, she played in the Pinellas Senior All Star Team and was a member of the St Pete Raiders State Cup Championship team in 2003. After graduating from Shorecrest, Taylor attended Duke University.
A pitcher on the 1989 State Champion Baseball Team, Fred Rath '91 had a 90.9% winning percentage. He tallied 213 strikeouts and 20 career wins in his three seasons pitching with the Chargers, placing him in the top 5. Fred was Drafted by the NY Yankees in round #29 out of high school and was signed by the Minnesota Twins in 1995 after his USF baseball career. The only Shorecrest player to reach the Majors Leagues, Fred played with the Colorado Rockies.
We are excited to welcome Taylor Tremaine '07 and Fred Rath '91 to the Shorecrest Athletic Hall of Fame!
Our other two 2020-2021 inductees, Zach Wendkos '02 and Chrissy Mastry '06, will be honored at a future Shorecrest athletic event and welcomed to the Athletic Hall of Fame.
Congratulations to our newest Athletic Hall of Fame Inductees!