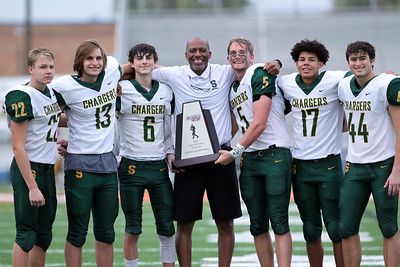 Published 11/18/2021
by Coach Anthony McCall, Athletic Director
Shorecrest Chargers Varsity Football put together a victorious gameplan to stop Trenton’s Riverside Christian 26-16 on November 13 in the SSAC Florida State Championships.
Tenacity, resilience and camaraderie all factored into the Shorecrest Chargers Varsity Football team’s 2021 success. One element that can’t be left unaddressed was their determination to reach the team’s main goal, which was to get better every day. The coaching staff witnessed this group work hard and improve for 12 consecutive weeks as they accepted praise and constructive criticism to become a galvanized team that refused to lose sight of their destination… the State Championship game.
The Championship game vs. Trenton, Florida’s Riverside Christian Wranglers started on November 13 with rainy conditions, which did not bode well for the Chargers’ explosive passing game. The Wranglers added to Shorecrest’s frustrations, taking the opening possession of the game and keeping the ball for the first 9 minutes of the game.
Riverside failed to score on their opening drive, and 5 plays later Chargers quarterback Drew Bunn ‘23 went down with an ankle injury.
Drew re-entered the game to throw a 37-yard touchdown to Henry Pickard ‘22 on 4th and goal for the game’s first score.
The first half ended with a score of 6-0 (Shorecrest).
Shorecrest opened the 2nd half with an impressive 6 play, 75-yard touchdown drive. The team’s possession was highlighted by two dynamic runs by Aneko Jackson ‘23. The drive was capped by a 24-yard touchdown pass from Drew Bunn ‘23 to Henry Pickard ‘22. (14-0 Shorecrest).
The defense continued to dominate the game, holding Riverside scoreless on it’s next possession. On Shorecrest’s next possession Drew Bunn ‘23 connected with James Floto ‘23 for a 50-yard touchdown (20-0 Shorecrest).
Riverside scored at the beginning of the 4th quarter, and after a Shorecrest turnover scored their second touchdown (and 2 point conversion) with 7:58 remaining in the game (20-16 Shorecrest).
The Chargers fended off the Wranglers' last-ditch efforts. The offense managed to consume 4:18 before punting to Riverside. Riverside muffed the punt and Shorecrest recovered on the 8-yard line. Aneko Jackson ‘23 sealed the victory with an 8-yard touchdown run, for a final score of 26-16 Shorecrest.
Coach McCall shared the following messages after the game:
“Thank you to Head of School Nancy Spencer for her undying support of our athletes and coaches. Thanks to our parents for providing  a great fan base for the team at home and on the road. Thanks to an excellent coaching staff and a group of boys who never quit, and consistently bought into and followed our gameplan. Finally, thanks to my wife Dolores for being my biggest cheerleader!”
Photos thanks to Shorecrest parent Krista Waitz.
Watch Fox 13’s recap of the game here: https://vimeo.com/647382219