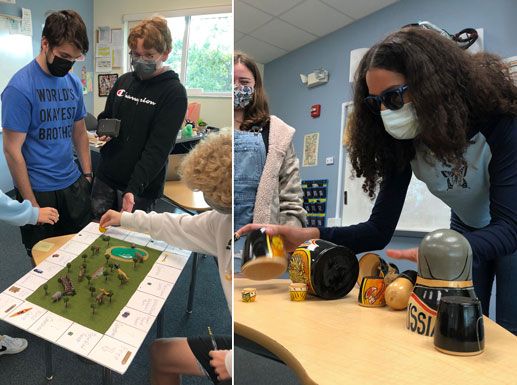 Published 1/13/2022
by Kayla Brazee, Upper School History Teacher
In Shorecrest Upper School Honors U.S. History students are exploring the Progressive Era. To learn more about the time period, students were asked to create interactive presentations that focused on one Progressive Era reform. Each group taught a 10-12 minute class on their assigned reform that had to engage their peers in some way.

One group created a board game that centered around conservation - particularly the establishment of the National Park Service and Teddy Roosevelt.
Another group presented on the Temperance Movement of the Progressive Era which sought to discourage the use of alcoholic beverages in the United States. One of the arguments behind temperance was that alcohol led to less-productive workers. To make their point, the group rubbed sunglasses with Vaseline to emulate drunkenness and asked their peers to put together Russian nesting dolls efficiently. Not surprisingly, the challenge was very difficult! In the end, it was found that "sober" workers were far more safe and productive than those who came to the factory intoxicated.

“I was very impressed with the creativity of the students.” shared History Teacher Kayla Brazee. “It was definitely a project they will not soon forget!”