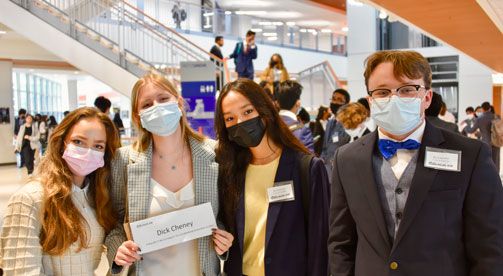 Published 1/27/2022
by Kurt Wahlgren, Social Studies Department Chair
Shorecrest delegates participated in a variety of committees at the 19th annual GatorMUN (Model United Nations) conference on the University of Florida campus. Committees at the three-day conference ranged from The Peaceful Uses of Outer Space, and Disarmament and International Security, to historical committees, such as Egypt’s (1952-1957) Revolutionary Command Council, and Alcatraz 1934.

Before the conference commenced on Friday, Shorecrest delegates spent time researching and writing position papers for the two topics that their committee would debate. In addition, delegates had a fun time walking the campus each day and browsing the UF bookstore.

Cian McCarthy ’22 – “This conference was a blast! I was on NASA's Board of Directors during 1998-2000, where we had to face backlash from President Clinton, remedy international conflicts with a newfound International Congress for Space Exploration, and save the ISS from the computer shutdown of Y2K. We translated the aliens' language and created a political alliance with them, which helped us when a 1 km^3 asteroid nearly wiped out the Earth, as they were able to save us. Model UN is always a great experience, as committees can be so varied and so deeply interesting. The level of thinking experienced is more focused and immersed than anything I've been a part of before."

Alexa Rose ’22 – “Being my first in-person MUN conference, GatorMUN was a really fun and unique experience in many ways. My committee was ‘Crisis in Camelot: King Arthur's Court,’ a committee that combined both legend and historical elements into political decision-making processes. I was Sir Percival, one of the Knights of the Round Table who had the duty to make decisions through the advice of fellow knights as well as of the Queen and King Arthur. I'm grateful to have had such an opportunity during my last year of high school and I hope that future Shorecrest delegates feel the same as well.”

Athena Smith ’22 - “Attending GatorMUN for the first time was both an intellectually stimulating and genuinely fun experience. My committee was a new Constitutional Convention taking place in 2003 in which the delegates represented major players in the legislative, judicial, and executive branches. Our chairs were really helpful, and by the end of the weekend we had rewritten the U.S. Constitution, advocating for our characters' own ideas to shape the final document. As John McCain, it was interesting to speak for someone who holds many positions which cross traditional party lines, and his complexity as a political figure challenged me to think outside of the box. Overall I'm really glad my last high school MUN conference was so well-run and enjoyable.”

Taylor Hicks ’23 – “This year, I worked in the Disarmament and International Security Committee (DISEC), and represented the State of Libya. I was thrilled when my group's working paper, DUR (Diplomacy, Unifications, Relations), got passed. The paper's clauses supported a removal of troops in Taiwan and the strengthening of economic ties with China and Taiwan.”

Rose Leary ’23 – “I loved being able to participate in this year’s GatorMUN. The committee I worked in was COPUOS (Committee of the Peaceful Uses of Outer Space), and it was so interesting to be able to discuss the future of Outer Space with my fellow delegates. My favorite part of the conference was when the paper I worked on, GPA (Galactic Protection Act), got passed!”