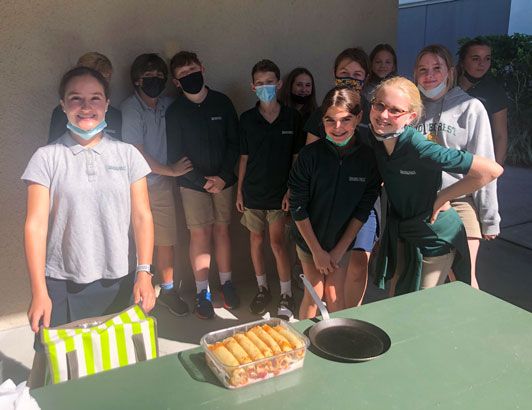 Published 2/4/2022
by Hélène Simon, Middle School French teacher
On the second of February, France celebrates la Chandeleur. The holiday mainly consists of eating crêpes and having fun with family and friends.

The tradition presumably originated in Roman times during the many Winter festivals. It was appropriated by Christianity in the 4th century with the set date of 40 days after Christmas on February the 2nd.

Thanks to Lily F. and her mother, seventh grade French class had a taste of this delicious French food tradition. In class students also learned that the first crêpe literally goes to the dog (because the pan is not yet hot enough and therefore the first crêpe is always a failure). If you can flip a crêpe in the pan while holding a coin in your other hand, you will have a prosperous year. Another fun fact is that if you throw the crêpe and it sticks on the "armoire" (cupboard), you will have luck for the year.

In the picture are also the classic crêpes that many French people eat, made by de Buyer. Bon appétit!