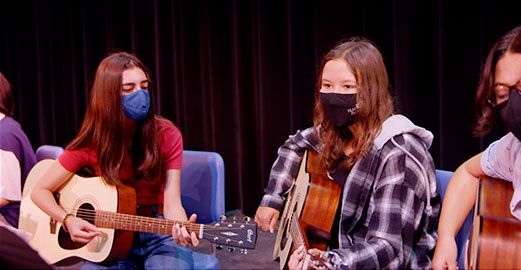 Published 2/4/2022
by Nancy L. Spencer, Head of School
Re-enrollment season is upon us, and when I think about why families choose Shorecrest for their children’s education year after year, I think about the power of being a part of a community over time and the experience for children of growing up within a community where they are known, loved and nurtured. A small moment at last week’s Lower School Town Meeting brought home to me how meaningful are the relationships formed between teachers and young children, and how that connection extends throughout their years at Shorecrest and across the many acres of this campus.
Last week’s Lower School Town Meeting was held inside, in the Janet Root Theatre. The children seemed to enjoy the space, looking around at the stage, pointing out the high ceilings and exploring the novelty of sitting in rows in the cushioned seats. I was standing near a Kindergarten class, and some of our smaller students barely seemed to have enough body mass to keep the seat of the chair lowered! Seated together towards the back of the auditorium, the three third grade classes and their teachers stood out, all of them wearing their “Be The Change” bright, blue t-shirts in preparation for their march around campus later that morning.
There was plenty of room available in the JRT for all Lower Schoolers, faculty and the parents who came to watch Mrs. Johnson’s second grade class’s presentation. The class greeted the Lower School by grade, then led the audience in reciting the Pledge of Allegiance and (with hand motions) the Lower School motto. Next the students recited a poem about the seven continents of the world and shared their research about Tanzania and its landscape.
After the class’s presentation, a special treat was in store for the audience. Shorecrest's Director of Bands, Ethan Updike, brought his Upper School guitar class to sing and play a few songs for the Lower School. Crowd favorites “Bad Moon Rising,” “Stand by Me” and “Sitting at the Dock of the Bay” had the children (and adults!) clapping along to the music. I watched the students in the seats intensely observing the older students on the stage and it was clear, some of them were thinking, “I want to do that!” At the end of the performance, there was loud cheer from the audience to show their appreciation. This kind of modeling is unique in a PK3-12 school, where children are exposed to new opportunities and can imagine their future by watching older students who are members of the same community.
What happened next is what really warmed my heart. The musicians took their bows and were getting ready to head off stage when a Lower School teacher asked them to introduce themselves by name. One by one, these Upper Schoolers passed the microphone down the line and said their names and what grade they were in. One faculty child in the group cheerfully announced that his mother was a Lower School teacher sitting in the audience.
I could see the beaming faces of the Lower School teachers who proudly recognized and appreciated their former students. Their affection and love was tangible. This sentiment was confirmed when a teacher told me, “We teach so many of them and they grow up so quickly. It means a lot to see them performing as Upper Schoolers for the younger students. We are so proud of them.”
This kind of connection is what comes from growing up at Shorecrest.
All the best,
Nancy