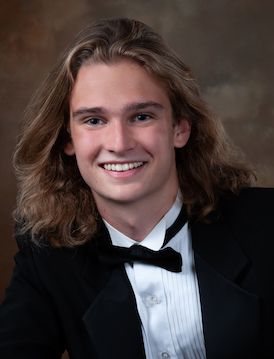 Published 2/10/2022
by Raffi Darrow, Ebytes Editor
Congratulations to Shorecrest senior, Cían McCarthy ‘22, who won first place in the George S. & Stella M. Knight Essay Contest in conjunction with the St. Petersburg Chapter of the Sons of the American Revolution. The Sons of the American Revolution is a non-profit, non-partisan organization dedicated to promoting patriotism, preserving American history and teaching American history to future generations.
Essays were submitted on a topic of American History from the Colonial to the Federal period and were judged based upon historical accuracy, clarity, organization, grammar and spelling, and documentation. Upper School history teacher, Ron Heller, informed Cían about the contest after learning about his interests in writing and history. Cian's submission was entitled, “Thomas Jefferson: A Federal Success, A Gubernatorial Failure.”
“While we must acknowledge his general failure as Governor, it should not, and does not, take away from his legacy.” Cían wrote about Thomas Jefferson. “Instead, it should add to it, showing that even titans of American History have times where they lose control and don’t know everything, and that is a humbling thought.”
Winners will receive a cash prize at a luncheon in late May. State-level winners from around the country may go on to compete in the national-level contest. Good luck Cían!