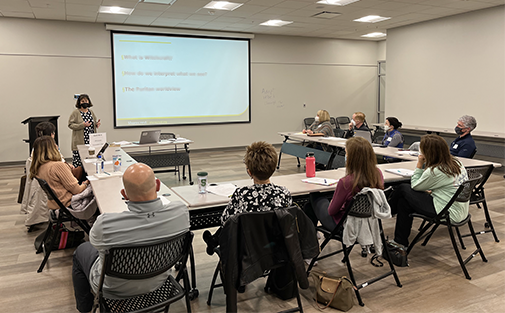 The Power of the Primary Source

Published 2/11/2022
by Nancy L. Spencer, Head of School
This week marked my return to the classroom as a history teacher, for the first time in almost two years. As a faculty member for the Evening Charge program, I was very excited (and, I admit, a little bit nervous) to be back standing in front of students. As the evening unfolded with this wonderful group of Shorecrest parents and grandparents, our discussion about historical events reaffirmed to me how learning about what has happened in the past gives context and understanding to our world today.
What I love most about history is the ability to hear voices directly from the past, through primary source documents. As we explain to even our youngest students, a primary source in history is something that was written or created during the actual time period being studied. It is a first-hand account, a direct connection to the people who were involved. A secondary source is something written about the time period or event, often with an author’s own interpretation or analysis. While a secondary source can provide context, it is a layer removed from what actually happened.
A primary source can act as a time machine, and provides understanding about other peoples’ stories. Diaries, letters and journals give insight into the emotions and experiences of others long gone from this earth. Primary sources allow us to travel the world without leaving the room.
My own master’s thesis was based on primary source letters from Ethel Walker, a woman who started her own boarding school for girls in 1911. Forty years of correspondence between two close-knit sisters was packed away in boxes located in the Yale University library archives. These were letters chock-full of emotions, describing in detail the joys and challenges of school life. Often I could literally see Ethel’s emphasis by the indentations left by her pen and the number of underlines or exclamation points handwritten on the page. Sometimes I felt almost too nosy, as if I were reading intimate expressions not meant for my eyes. Other times I found myself nodding my head in agreement as Ethel described aspects of school life unchanged through the decades.
The power of the primary source.
Another of my favorite primary source discoveries resonates during this Black History Month. It is a 1960 edition of what is known as The Green Book. First published in 1936, The Green Book “was the brainchild of a Harlem-based postal carrier named Victor Hugo Green. Like most Americans in the mid-20th century, rates of car ownership had exploded in the years before and after World War II.  But the lure of interstate travel was also fraught with fear for African Americans who risked discrimination as they sought to find hotel accommodations or places to eat. Inspired by earlier books published for Jewish audiences, Green developed a guide to help black Americans indulge in travel without fear.”
Slowly scrolling through the pages of the 1960 Green Book, I looked for St. Petersburg, and located the appropriate entries. It was a poignant moment, to read and connect with the experience of others from so many years ago.

The power of the primary source.
At my heart, I am a history teacher, and I delight in sharing this passion with others. As our Shorecrest students create original papers, projects, journal entries, and even social media updates, it’s fascinating to consider that they may be leaving primary sources for future generations to uncover.
All the best,
Nancy