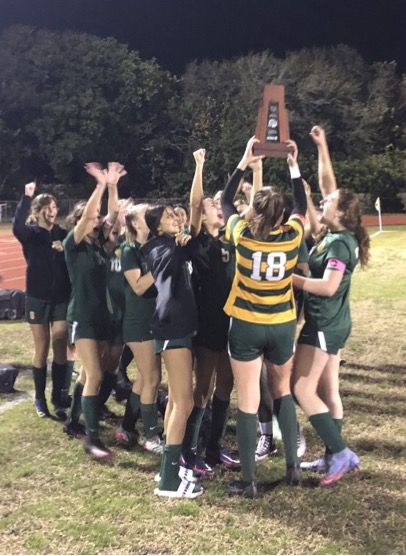 Published 2/16/2022
by Coach Idinge
In one of their most challenging games all season, the Varsity Girls Soccer Chargers beat Indian Rocks Christian School in the Regional Semifinals: 3-2

The opponent scored early forcing the Chargers to come from behind. Tied at 2-2 going into overtime, the Chargers needed one goal to avoid a penalty shootout. With hard work and determination, the team fought back and scored the third and final goal with just over three minutes remaining in the second overtime period.

Kaja Dionne '24 scored an early goal five minutes into the game and the Chargers never let up. You know it's a good game with the goalkeeper, Sonoma Kasica '24, is required to make only one save in the eighty minutes of playing time. Gabby Marshall '22 led the team with two assists and one goal, and Addie Oman '24 finished off the opponent with the fourth and final goal of the game.

Coach Skyler played many girls during this game in order to rest some nagging injuries and give the Chargers the best chance of having a healthy squad for Friday's State Semifinal game.