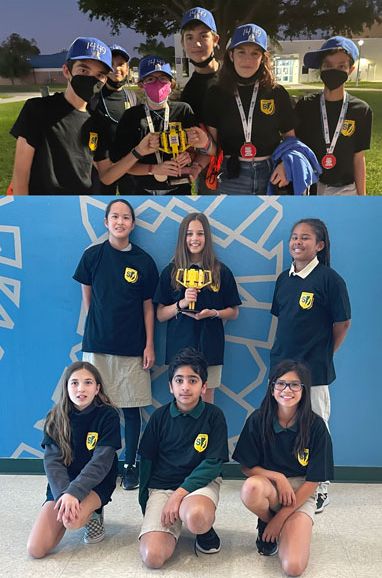 Published 3/18/2022
by Christine Scoby, MS Technology Teacher and Robotics Sponsor
The Shorecrest Middle School FIRST LEGO League robotics teams competed in the West Florida Regional Championship held at State College of Florida in Bradenton on March 5, 2022. The qualifying meet was the first opportunity teams had in recent years to watch live robot matches (due to COVID.) Both Shorecrest teams realized their time spent after school and during study hall since the beginning of the school year working on their robots and programming resulted in robots that were sturdy and had the capability of using sensors in their programming.
Team 1449 made improvements to their jig used to line up the robot at the start of a robot run. They improved their programming by coding MyBlocks to automatically calibrate sensors at the beginning of each robot run. Sensors guide robots in moving straight, following lines, and line straightening.
Team 1448, the rookie team, spent time between competitions creating a new program that would knock down the bridge decks as well as drop the innovation model into the Cargo Connect circle. They spent a lot of time strategizing the order of the mission runs. The team started to work on using sensors in their programming but did not complete the necessary programming before the Regional Championship.
Both teams fared well during competition. Team 1449 scored their top score of 310 points in the practice round. Team 1448, waited until their last round to pull out their high score of 255 points.
Another element of FIRST Lego League is Innovative Projects. The theme this season focused on the transportation of cargo, thus the season title, “Cargo Connect.” Team 1449’s research question was “How can we help truck drivers access water during beehive transportation to keep bees from overheating?” Their solution uses an app to identify the locations of close water sources such as gas stations, public rest stops, or fire stations that can be easily accessed by truck drivers to water down bee hives. Drivers can then use the GPS built into their mobile devices to navigate to the closest location identified on the app. They met with experts in the field of geospatial solutions, software engineering, apiary owners, and transportation companies that ship bees from one farm to another.
Team 1448 researched how human organs are transported for transplantation. Their research question was, “How might we improve the process of harvesting and transplanting human organs by reducing transit time?” After several interviews with Dr. Jeffrey Jacobs, thoracic surgeon and head of pediatric heart transplants at Shands Hospital and Shorecrest alumni parent, the team had several problems that they were interested in solving, but decided that reducing transportation time would have the biggest impact on patient outcomes. Their solution involves harvesting organs remotely, so the transplant team never has to board an airplane. The team spoke with Darla Hutton, Vice President- US Marketing and Custom Hospital Analytics for Intuitive and Shorecrest parent. Their interview focused on the capabilities of the robot-assisted Da Vinci Surgical System to perform a transplant surgery remotely. Team 1448 also considered innovative, faster ways to transport organs. With the use of two different types of drones, the team hopes to reduce nationwide travel time to less than an hour and a half from anywhere in the US. Both teams received callbacks during the Regional Championship where they had the opportunity to share their solution with the full panel of project judges.
The final component of FIRST LEGO League is Core Values. Beyond robotics and engineering, teams are expected to exhibit the following FIRST Core Values: Discovery, Innovation, Impact, Teamwork, Inclusion and – their favorite – Fun. Teams were observed by judges throughout the competition and were asked questions during judging that focused on Core Values. Both teams receive callbacks in this area too.
The team coaches, Dr. Anna Baralt and Christine Scoby are happy to announce the results of the Regional Championship. Team 1448 came in first place out of 32 teams in the area of Core Values. They were thrilled with this recognition. Team 1449 won first place in the category of robot design. They also secured a bid to the State Championship that will be held in Niceville, FL, on April 1-2.
Participation in FIRST LEGO League robotics offers Middle School students a fun and exciting platform to learn about a vast number of opportunities available to them through STEM studies. Chargers build on their skills of learning, confidence and teamwork along the way.