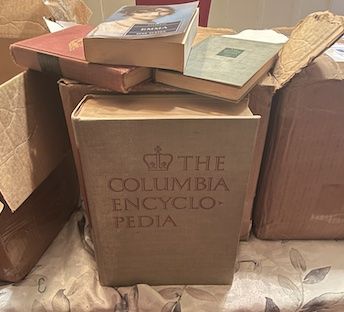 Published 3/17/2022
by Natalie Updike, Upper School English Teacher
In response to an essay contest sponsored by Bad Animal, a bookstore in Santa Cruz, California, Mila Salamone ‘22 celebrated her first-place win with a prize of 500 books!
An article explains the contest’s origins: “The Rhoads Prize, as the award is called, honors the memory of Noah Rhoads (1992-2014), who was a student at Scotts Valley High School and earned a degree in philosophy at UCSC. Bad Animal co-founder Andrew Sivak explained that his book department has spent a year assembling the titles— ‘some signed, a few first editions, but mostly solid paperbacks of the finest works in print.’”
Andrew Sivak continues, “‘We thought something more interesting and powerful would be to give a broad collection of our choosing to a student for nothing. Once this idea took hold, my thoughts kept turning to Noah Rhoads, who was obsessed with reading and the idea of desire.’”
According to Sivak, the sole criteria for the contest as well as submission instructions included the following: “‘How badly do you want it, and how well can you articulate that want? [...] To be considered, submit a response of no more than 1,000 words to the following prompt: Why you? How much you may deserve the collection is of no consequence. What matters is how badly you want it. The winner, to be selected by a celebrity panel of writers and bibliophiles, will hold the title of Bad Animal Rhoads Scholar. […] Our estimate for the value of the grand prize is $3,000; second place wins a $200 gift card; third place gets $100. […] I hope this prompt knocks these high school students off their typical self-glorifying personal essay perch. I read for UCSC admissions for two years and was appalled at how formulaic and trite the essays were. We wanted our prompt to be totally alien to that way of thinking. The collection is meant to be an intellectual catalyst.’”
Excelling within the criteria and articulating a masterful, original essay, Mila was informed of her win via email from Sivak.