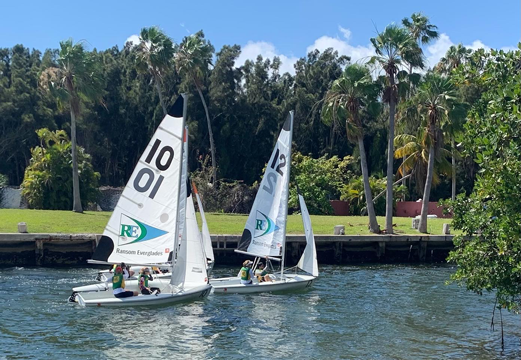 Shorecrest Sailing Looking Ahead to Districts

Published 3/17/2022
by Guthrie Braun '22
Last weekend the Shorecrest Varsity Sailing Team was at the Ransom Everglades School in Miami for its fifth double-handed regatta of the season. The Chargers finished 5th out of the 18 schools competing. Although there are still two regattas left on the schedule, Shorecrest has already accumulated enough points throughout the regular season to qualify for the District Championship.
With co-captain Guthrie Braun ‘22 on shore to rest a minor injury, the varsity “A” boat skippering duties were handled by co-captain Ethan Danielson ‘22. Crewing in the “A“ boat was Rosie Simpson ‘25, who had just returned from Spain where she had been racing as a member of the Team USA at an international youth regatta. This “A” boat duo held its own against stiff competition.

Kate Danielson ‘24 skippered in the varsity “B” division and out of her seven races, she turned in two “bullets” (first place finishes). It was an outstanding performance by the young sophomore. Morgan Shirey ‘24 crewed the varsity “B” boat for four of the races with Bella Testa ‘23 sailing the last three, each sharing in a first place finish.
The Shorecrest team spent an extra day at Ransom to participate in an unofficial “team race” invitational regatta. Team racing differs from fleet racing in that two schools go head to head with three boats on the water for each. It is a competition of multi-boat tactics — a type of sailing that is not a major focus for the Shorecrest program. Despite that, the Chargers still managed to win two of its five races in a field of some of the best schools from the Miami area and the U.S. Virgin Islands. Guthrie Braun '22, Ethan Danielson '22, Kate Danielson '24, Rosie Simpson ‘25, Andrew Tang ‘22 and Ainsley Braun ‘25 sailed for the Chargers.
Shorecrest’s next regatta is this coming weekend at the Davis Island Yacht Club, Tampa, in an event hosted by Plant High School.