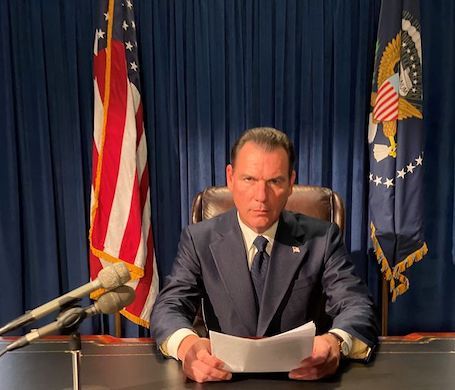 Due to a public speaking ability learned by listening to his newsman father, Paul Wilson was chosen to read the student announcements at Shorecrest Preparatory School in the mid 1980s. But he didn’t always mimic his father John Wilson, the retired Tampa news anchor.

“Sometimes I’d read the announcements like Richard Nixon,” Wilson, 54, said. “Who knew that would lead to a job?”

Decades after graduating from Shorecrest, the St. Petersburg actor was cast as Nixon in The First Lady, the Showtime series that premieres April 17. According to Showtime’s website, the series is a “revelatory reframing of American leadership through the lens of the first ladies.” The First Lady stars Viola Davis as Michelle Obama, Gillian Anderson as Eleanor Roosevelt and Michelle Pfeiffer as Betty Ford, according to IMDB.com. Nixon is part of Ford’s story.

“It’s what the production team calls the ‘Betty Block,’” said Wilson, who was recently featured in the movie "The Conjuring: The Devil Made Me Do It" alongside his brother, actor Patrick Wilson. “It’s a tremendous cast. There is Michelle Pfeiffer as Betty, Aaron Eckhart as Gerald Ford, and, of course, I am Nixon.”

It’s a part that Wilson believes he was meant for. Though just a little kid at the time, Wilson has a memory of watching Nixon resign.

“Having a news luminary as a father, he would sit me in front of the TV at key moments,” Wilson said. “I remember we had a color TV and watched as my parents were in shock.”

Nixon then became a punchline whose distinctive voice was mimicked by comedians declaring, “I am not a crook.”

“I’m not necessarily an impersonator,” Wilson said. “But my voice kind of falls in a benevolent range for many famous characters like Richard Nixon, Johnny Carson and Ronald Reagan.”

He impersonated all three while reading the announcements at Shorecrest. “I would have conversations with myself,” Wilson said with a laugh. A few years later, Wilson met impressionist Rich Little while backstage at an event at Ruth Eckerd Hall. “We had a conversation with me as Nixon and him as Reagan,” Wilson said. “It was such a highlight. Now, fast forward to a year ago.”

That’s when Wilson saw a casting call for Nixon in The First Lady , created by his friend Aaron Cooley.

“I texted Aaron, ‘I got your Nixon,’” Wilson said, but did not provide further details to Cooley. Wilson, whose resume also includes "The Right Stuff" and "Big Stone Gap," studied clips of Nixon on YouTube so he could drop the comedy schtick and add reality and drama to his portrayal of the ex-president.

“Wherever you are politically, he was a man,” Wilson said. “People loved him. People hated him. But he was a real person dealing with real things.”

He then filmed an audition and sent it off to Cooley and the casting agent.

“The next day, Sunday morning, I’m out cleaning the pool and my phone’s blowing up,” Wilson said. “I check my messages, and there is one offering me the part of Richard Nixon, but they need me to be in Atlanta that night. I call my travel agent and, like that, I’m Richard Nixon.”

On Facebook, Cooley later thanked Wilson for his portrayal.

“Every once in a while in this business you get to involve a great friend in one of your projects — even better when he’s saving your ass by being able to channel a dead President!” Cooley posted. “Thank you Paulie Wilson for coming west to the ATL to join #TheFirstLady team. You are definitely not a crook!”