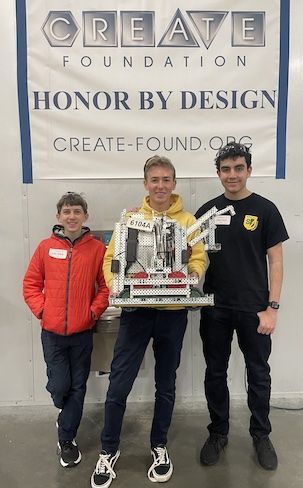 Published 4/14/2022
by Melissa Estremera, US Computer Science Teacher
On April 7- 9, 2022, Shorecrest Robotics team #6104A competed in the Create Robotics Open World Championship Tournament in Council Bluffs, Iowa. The program was designed to be an advanced engineering challenge that incorporates technical skills with communication, social, and leadership skills, with a heavy emphasis on innovation. They believe mankind's most pressing issues will be solved through innovation, and these skills are essential to tomorrow’s leaders.
The team members who traveled to the competition were Dylan Winer ‘23, Josef Broz ‘23 and Julian Pollack ‘24. During this competition they worked with and competed against 48 other teams including teams from Hawaii, New York, California and Nebraska to complete robotic skill challenges and score points in a robotics competition.
After many learning experiences, team #6104A placed 9th overall! Additionally, they won the MegaAlliance Award. The MegaAlliance was a mini competition which allowed the Chargers to work in an alliance with 3 other robot teams and 1 drone team to complete robot challenges. Their alliance included teams from Nebraska, Texas, Hawaii and Maryland, and they reached first place for their performance. Please congratulate these robotics team members in their success!