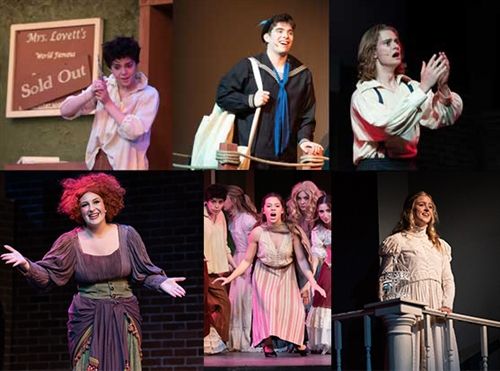 Published 9/1/2022
by Raffi Darrow, Ebytes Editor
The award-winning Shorecrest Performing Arts thespians were back in the Janet Root Theatre for the eerie musical “Sweeney Todd: The Demon Barber of Fleet Street” in April 2022. The production was reviewed as part of the Broadway Star of the Future program presented by the David A. Straz, Jr. Center for the Performing Arts. The cast received high praise from the judges and multiple awards and nominations.
Nominated for Outstanding Actor in a Musical were: Sofia Ayral-Hutton ‘23 (Tobias), Marco Camuzzi ‘23 (Anthony), Cían McCarthy ‘22 (Sweeney Todd), Verity Rabin ‘23 (Mrs. Lovett), and Brooke Wright (Johanna) ‘22.

Congratulations to all of our award winners and nominees! The School will learn later this month about next steps for viewing the awards program.
The Straz Center presents the Tony Awards® inspired Broadway Star of the Future showcase to honor artistic excellence in Tampa Bay Area high school theater productions, programs and students. Awards and educational scholarships will be presented by the Straz Center and The American Musical and Dramatic Academy. Best Actor and Actress winners are invited to represent the Straz Center in the National High School Musical Theatre Awards, “The Jimmys®”, based out of New York City. Learn more at: ​​https://www.strazcenter.org/Community-Impact/Arts-Education/Broadway-Star-of-the-Future
Shorecrest has been honored with numerous awardees and nominees in the Broadway Star of the Future Awards. Alumnae Senna Prasatthong-osoth ‘19 and Kylie Heyman ‘15 were prior winners selected to represent Florida at the Jimmy Awards. Cían McCarthy ‘22 was previously awarded 2020-2021 Best Actor in a Musical for his portrayal of William Shakespeare in Shorecrest’s "Something Rotten!"