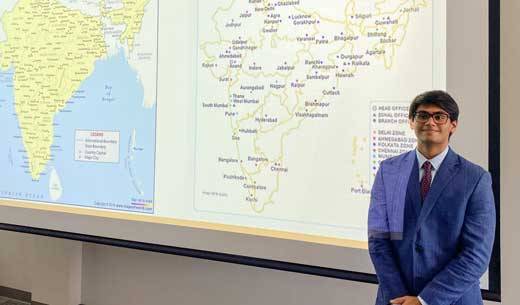 Published 5/12/2022
by Kurt Wahlgren, Social Studies Department Chair
During the last month of the academic year, students, family, and faculty, gathered to participate in Global Scholars Initiative thesis defense presentations. This year Shorecrest had the largest class of GSI scholars in recent memory. The expertise of faculty advisors Charla Gaglio, Marina Pallares, and Ron Heller helped mentor GSI scholars over a three-year process.
Below are the titles of each thesis project as well as recollections from GSI graduates.
The seniors recalled memories from their GSI experiences:
Aspen Slavick-Gierlach ’22: "As I worked through my project and refined my focus, I truly realized how expansive the field of gender medicine is within the medical field and beyond. It was shocking to learn about such a wide disparity of medical treatment, all depending on one’s gender identity, and yet my research has also impacted the way that I advocate for myself and my medical experiences."
Cìan McCarthy ’22: “While conducting research on the status of climate change technology in Ireland, I found a surprising amount of well-respected scientists – a tenured MIT professor, for one – were in opposition to Irish and UN climate policy: they find that the data show a very slow rate of climate change, which went against everything I had built my argument upon. What many people take as fact, some scientists still debate. Weighing up the benefits and drawbacks of investing in climate change technology became a very nuanced argument that I was able to explore through GSI."
Mila Salamone ’22: “I knew right away that I wanted to do my project on women in the Japanese martial art of Aikido. Except, I thought I was using gender to reveal something about how Aikido inhibits women. After my project, it looks like Aikido points towards something beyond gender that is fundamentally uniting. I think now that the best solution is to ask women about their experience training first and then ask about being a woman later. Most of all I want five more years to investigate this topic.”