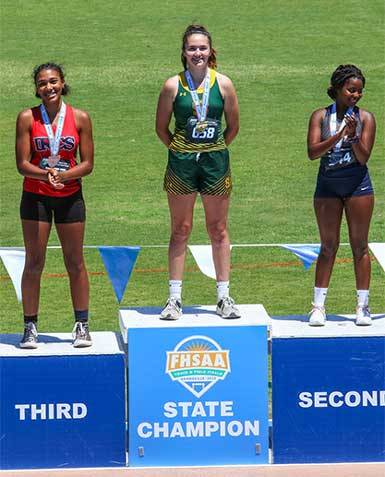 Published 5/19/2022
by Coach Cameron
The Track and Field Florida State meet was moved to the University of Florida this year.
Girls javelin was one of the very first competitions of the day. Sonoma Kasica '24 was in the second flight and threw last. She came to the state meet with the leading mark from all regional meets with a throw of 37.34 meters. As the defending champion, all eyes and all of the pressure was on her. Sonoma responded by putting the pressure back on the field right away with a solid first throw of 37 meters.

The second time Sonoma stepped up to the runway, she was in a comfortable space ready to open up. Sonoma moved down the runway and got to the edge and the Javelin came flying out of her hand. Right away Sonoma knew it was a good one, and she could be seen celebrating even before it landed. By the time the javelin hit the grass, it had traveled 4 meters further than the first throw to a distance of 41.60m! This mark won the state title, and also put Sonoma above all javelin throwers in all classes 1A-4A in Florida! This performance also made Sonoma the first two-time State Champion in the same event.

"It was great ending to a strong year for Shorecrest Chargers Track and Field!" said Coach Cameron.