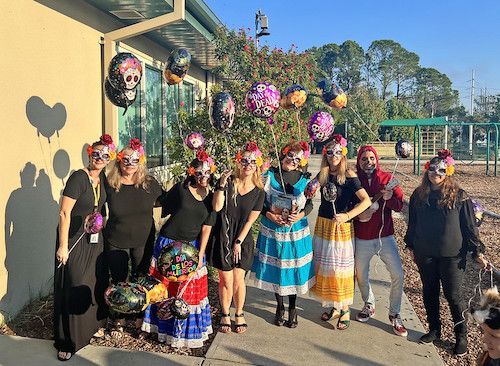 Published 11/3/2022
by Emili Jaime-Allwood, Lower School Spanish Teacher
Day of the Dead, Día de Los Muertos, is a holiday celebrated in most Latin countries on November 2, however Mexico is the Latin country most recognized around the world for celebrating this holiday. Mexicans celebrate Day of the Dead on November 1 and November 2.
Students in Lower School learned about Día de Los Muertos in Art, Music, and Spanish classes. Each year this celebration becomes better known in the United States, and children are seeing its symbols in stores, movies and customs around Halloween-time. It is on UNESCO’s list of Intangible Cultural Heritage. Chargers learned about what the holiday represents in Latin culture and some traditions from Mexico for this day, like an ofrenda. In Art class Lower School students made crafts such as skulls, cats or decorated skeletons - which ultimately were used to decorate two ofrendas in the Lower School Gallery in the Raymund Center. Third and Fourth graders put together the ofrendas and made marigold flowers and papel picado to decorate it. The ofrendas will be on display in the LS Gallery through November 18.
The children were also invited to taste pan de muerto, bread of the dead, which is a typical bread from Mexico eaten during this celebration. They played loteria (Mexican bingo.) In Music class they sang songs from the Disney movie “Coco,” which talks about the Day of the Dead and the importance of family in a way that children love!
You may have noticed many members of the LS teaching team dressed as catrinas (women skeletons) and Miguel from “Coco” to bring some of this excitement to last week’s costume parade.